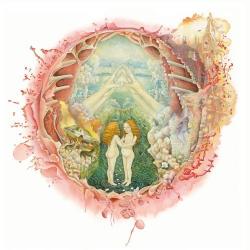 Anyway, follow the recipe of choice and make yourself a batch. Then eat them. Tasty!

Now, try the same thing, but this time, forget to add the sugar. And the chocolate chips. Now eat them.

Are they as tasty?

This is an very apt analogy for the Islands and their album making career. Return to the Sea equals gooey, chocolately, cookielicious goodness. The follow-up, Arm's Way equals punishment food.

Alright, maybe Arm's Way might not be as extreme as suggested here, maybe the difference is something closer to "fabulous homemade cookie" versus "store-bought, pre-package rock of a cookie", but in any case, it is a disappointment. Somewhere along the way, Islands lost the fun, whether it be by accident or in a bout of ill-advising dieting, but very little on Arm's Way measures up to the pop gems on Return to the Sea, and instead you're left with a lifeless husk of flavorless junk.

Now, what exactly went wrong with Arm's Way might be as simple as imagining the members of this post-Unicorns band decided to take their music "seriously" for once. I am all for seriousness in its place, but on an Islands record is not its place. The production is too clear. The arrangements are too ostentatious. The subject matter isn't far enough out there. It is too much of a "rock" album and not enough of a "roll" album, if you catch my meaning. This album is the "sophomore slump" personified. It is hard to really point out any single point where the album bottoms out, so maybe I should just try to emphasize the positive (for now): "J'aime Vous Voire Quitter" is a good song. (Exhale). I said it. It actually comes close to capturing some of the madcap fun of Return to the Sea without getting too bogged down in trying to be an art rock band (minus the Latin breakdown). "Creeper" is synth-pop confection that will rot your teeth, but you won't care. "To a Bond" is restrained ballad that using the strings to its advantage rather than barraging us with the unnecessary instrumentation.

As for the rest, well, it is a mess. No, worse than that, it is a disaster. "Kids Don't Know Shit" should be retitled "The Band Don't Know Shit". "Life in Jail" is as much of a downer as the title implies and has no place on an Islands record. "In the Rushes" desperately wants to be a momentous musical moment, but really just ends up sounding like an outtake from a tribute to Rushmore. "I Feel Evil Creeping In" feels to me like a horror movie schlock director trying to make a "serious" film but ends up eviscerating someone along the way just the heck of it anyway and "Vertigo", well, its just along 6 minutes too much for anyone to be paying attention at this point.

It makes me kind of sad that Islands seem to miss the mark by so much on Arm's Way, it was one of the albums I was most looking forward to this year. Alas, instead of bringing me the same joy and satisfaction that Return to the Sea brought a mere two years ago, Arm's Way goes down like those mistake batch of cookies where you leave out all the stuff you like and you're left with a shell of what could have been.