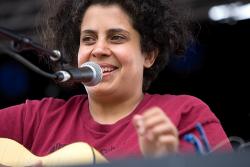 The most lingering feeling I had after walking away from the Kimya Dawson show at Capitol Hill Block Party, was that if all the world leaders could gather together to hear her play, and really listened to what she was saying, there would be no more war. There would be no more hunger or hate or awkward conversations. I think in this way Kimya might be the Bob Dylan of our generation, and she’d be able to change the world if only people would listen.

Only, Bob Dylan wasn’t humble. Kimya Dawson is most certainly humble. On stage she had only her guitar, and sat on a simple wooden chair. Her hair was in pigtails, and she wore a big red t-shirt and a skirt that looked like it may have had cartoon characters on it. Everything about her felt homey and familiar. She began by confessing, “I feel really nervous today,” which only added to her charm.

Kimya’s songs are equal parts hilarious and touching, and I found myself both laughing and crying in the hour I watched her. She somehow manages to write about huge issues without sounding at all preachy, and always with that dose of humor to keep the song genuine. Her lyrics are so clever, that it was no surprise her banter was just as entertaining. It would be useless to write all her witty comments here, there’s just not enough space and frankly, some of the humor would probably be lost in the retelling, but Kimya certainly had the entire (enormous) audience laughing throughout her set.

She also played for us some songs off her newest release, a kid’s record entitled Alphabutt, set to release on September 9th. For anyone with kids (you know who you are), I recommend Kimya’s album with caution, because it’s title track uses the word ‘fart’ probably upwards of a dozen times, and you can guess what the rest of the songs are like. But they are clever and fun and I bet kids would just love singing along to them.

After the kiddy segment, Kimya introduced us to her “favorite songwriter in the whole wide world:” her brother, Akida Junglefoot Dawson. He came out bashfully, saying that he’d never played for an audience before, and to please bear with him. There was no need for the warning however, because his song possessed all the folksy charm and blunt yet witty lyrics that his sister’s do.

Unfortunately Kimya may not be touring much in near future. She told her vast audience that she is now “sick of the biz. I just want to sing with my friends.” So she’s moving back to Olympia to form an all-ages, no experience required choir which will be performing at a bar mitzvah near you.

Kimya ended her set with a sing-along. Throughout the night she’d asked for various audience interactions, such as yelling “Ha ha ha!” on cue, or shouting out our favorite animals and what noises they make. But this was a short, sweet sing along, to Annie’s “Tomorrow.” Although I didn’t know the words beyond the first line, and I’m sure other were in the same boat, Kimya’s strong voice led us through beautifully. Even though it’s going to rain tomorrow (so say the weathermen), the warmth and comfort felt at Kimya Dawson’s performance will last me for a good long time, until the real sun comes.