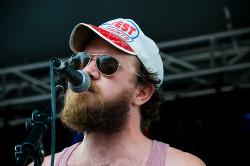 The big Seattle afternoon crowd sort of swept up the Cave Singers in their adoring collective arms. Guitarist Derek Fudesco and drummer Marty Lund created pinching, intricate layers of acoustic rhythms for the oddly cherubic yet wizened singer Pete Quirk to croon and harmonize over and inside. Anthems like "Royal Lawns" and "Seeds of Light' were greeted with in-time claps and cheers from the crowd. All the while the band showed that while Fudesco isn't showing a hint of his hard rock background (Murder City Devils, Pretty Girls Make Graves), and while groups like Hint Hint and Cobra High (which Quirk and Lund were parts of, respectively) are now gone, it still rocked.

Near the end of the set, Quirk touchingly admitted, "I feel like I could tell you guys anything, which is what really matters." It seemed strangely intimate a thing to say in front of so many people looking up at him, but that's the key: I think he was singing to all of us individually at the same time. The band spun into "Down The Road" as a heat wave descended on the previous coolness of the afternoon, and people fittingly began to take off some unnecessary outer layers.

The alien vibe of Quirk's singing and melodica and the uncanny changes in the weather seemed to put people into another frame of mind during the Cave Singers' set. It seemed like a moment of divine quiet before the madness of the Block Party kicked back in.