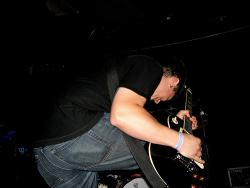 Although I was only able to catch four songs, that was enough to give me a good impression of Sleepy Eyes of Death. Their electronic music is reminiscent of the soundtracks from late 80’s sci-fi movies like Buckaroo Bonzai, Big Trouble in Little China, and even one of my favorites: Robotech. Think of M83’s “Car Chase Terror” from Before the Dawn Heals Us and you're getting the idea.

Synth over quick rolling bass-lines created an intense feeling of an on-coming chase scene that was only enhanced by addition of a fog machine, stage-front red lights, and the occasional strobe.