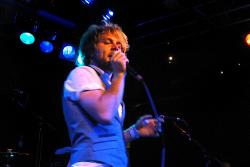 For a while I was wondering if I'd ever get to see Jaguar Love live.

Their first-ever show was opening for New Young Pony Club at Nectar, which I reviewed but a dear friend had a Halloween party that night, so I got to the club just before NYPC played, missing Jaguar Love. Then a few months ago I was all set to review one of their headlining shows at Neumo's but was either sick or was run down from my day job at that particular point so I made the game-time decision to go home. Then today I had to fight my way to Neumo's through a huge-ass crowd while the Fleet Foxes were playing if I had any hope of seeing Jaguar Love.

Fortunately, I did make it in. Even more fortunate, I was impressed with their abrasive sound. When I walked in I immediately thought of Rage Against the Machine, minus Zach dela Rocha's rhymes. Their sound was urgent and rockin'.

Singer Johnny Whitney has a Robert Plant swagger and a voice with a lot of range, but the best part of the band, to me at least, was the dynamic rhythm section of drummer J. Clark (formerly of Pretty Girls Make Graves) and, I think (but could be mistaken) Cody Votolato on bass (like Whitney, he's a former Blood Brother). Votolato's basslines where heavy as fuck and reverberated throughout Neumo's.

The band played for about 50 minutes and satisfied the sweating crowd inside a packed Neumo's. They played all 10 songs on their forthcoming debut record Take Me to the Sea.

Talking about this band with friends, they seem to be pretty polarizing. Some love them, others adamantly dislike them, but overall I thought they put on a good show and did nothing to soil the legacies of The Blood Brothers or Pretty Girls Make Graves.

1. The Man with the Plastic Suns
2. Bats Over the Pacific Ocean
3. Jaguar Pirates
4. Georgia
5. Vagabond Ballroom
6. Humans Evolve into Skyscrapers
7. Bone Trees and a Broken Heart
8. Highways of Gold
9. Antoine and Birdskull
10. My Organ Sounds Like…