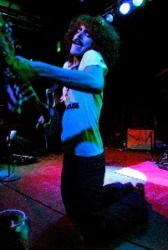 The crowd for previous band Past Lives didn't seem to want to leave. They seemed relaxed, and a little exhausted, as they milled about Neumo's. But who could blame them for staying, when that band's artful archness was over and done and the sweeping, blistering psychedelic rock-soul of Thee Emergency seduced them to stay so quickly?

Thee Emergency recently released a very ambitious sophomore album called "Solid," which while it definitely was that, was also bizarrely experimental and completely willing to take chances most rock bands fear these days. But that's Thee Emergency all over — why placate the masses when you can freak them out AND rock their spines out of their backs? Lead singer Zana Geddes (that's D. Vox to you) looking as pretty and athletic as ever, was also sporting a sweet new mohawk, bringing to mind the fire and intensity of Skunk Anansie leader Skin. Her musical mate Sonic Smith was fully under her control (and at one crowd-shocking moment, under her boot), and delivered mighty and snarling riffs and licks to make it seem like we'd all just stepped into a Tarantino-style early 70s action-horror movie.

It's pretty easy to focus on the burning soul of Vox and the fevered peels of Smith but when you see Thee Emergency live you understand that the whole five member band is so into that movie they're making, this isn't any period piece studio ruse. The keyboard player sat on his haunches near the right edge of the stage, and the crowd on the landing above with me were whooping and hollering through every song. The band tended to avoid the psychotropic bombastics of "Solid" but didn't mind playing the strongest material from that deep long player. When Smith and the band would psych out, Vox would sometimes walk to the wall at the left of the stage and chill down, then bounce back for more adrenaline-amped mayhem.

If some of the jams seemed a little lengthy, that's pretty much the nature of this beast. For the first time seeing Thee Emergency, my fears that the albums only told a hunk of the story were confirmed indeed. You've got to see them slam and grind it out in concert to be able to go back and play that action with the love you know you have for it. Don't miss them, and since they seem to love to play out, you probably will get your chance very soon.