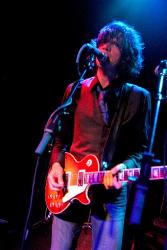 I am a huge fan of Head Like A Kite. I don't have their new album, produced by Brian Deck (Iron & Wine, Modest Mouse) but their debut a couple of years ago, made with members of Smoosh and some other local luminaries, was in heavy rotation in my life for many months. If you're familiar with the band, and know the pedigrees of David Einmo and Trent Moorman, you probably wouldn't be surprised how well their sound would turn out live. But I forgot all about that. I went into Neumo's to just check out a few songs of HLAK, and couldn't leave till they played the last ambient, drum-driven notes of their amazing set.

No, I wouldn't have bet it was going to rock that hard: Describing HLAK (keyboards, samples, moods, hypnotic rhythms, minimalist guitar riffs) makes them seem like an intoxicant-and-headphone kind of band. And maybe they are. But the combination of Moorman's incredibly funky drumming, so live and spine-rattling, so completely on The One, with Einmo's Stones-meets-Bowie style of blending Northern European blues-rock with American ghetto techno art-soul, is luscious in a live setting. When they want to groove amorphously, the audience sways. When they want to bite the mic and scrawl some aural graffiti on the wall of sound, the frat boys jump up and down.

It took awhile for people to trickle into the show, and at first I thought maybe I was going to catch an early break and hang back with about a dozen severe HLAK-heads with no crowd to be hassled by. But once that infectious combination of rock song and art noise started slamming the dark walls of the club, that small stream of the curious turned into a throng of the faithful. I saw many at the show who I think were discovering the band for the first time; not the usual trip-hop haunters from the High Dive or other clubs HLAK mesmerize late into the night. Three college age boys seemed a little confused: Is a band really supposed to show so much soul when it's a couple of white boys, a guitar, a drum-set, and a bunch of weird keyboards? Can this really be happening? Yes, children, it can.

Though no one from the Long Winters or so many other guests on the records showed up, handsome and long-legged HLAK collaborator and musical innovator in his own right Graig Markel and his lovely and charismatic wife Zera Marvel (who both have new records coming up themselves) jumped on stage on many songs to lend backing vocals, handclaps, tambourine playing, whatever it took. This sort of friendly chaos and spontaneous creative outpouring from friends is one of the many ways that Head Like A Kite distinguish themselves as perfectly fun adult rock and roll. Trust me, I will not miss the next local HLAK show for anything.