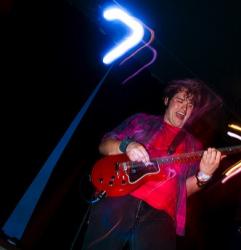 The Whore Moans remind me of the glory days of early Mudhoney shows, where piercing garage guitars and propulsive rhythms were doused with plenty of humor and somewhat parodic rage. Catching them at King Cobra at four in the afternoon was really weird; they are a quintessential late night party car wreck meltdown.

On songs like the tight, terrific "Some Kind of Love Hate" and the chugging, baiting "I Say Blood 3 Times" bassist and vocalist Ryan lead guitarists/co-vocalists Nikki O. and Jonny and drummer Jason through music that sounded as old school Seattle punk as it sometimes sounded LA metal in the 80s, and often veering into atonal 90s post-hardcore dissonance. (OK, usually, the compositions go in the opposite direction of that description, but it gives you an idea what they're about.) Ryan is more of a presence live than on the band's recordings, his fast picking and powerful playing often the heart of the monster.

The Whore Moans are a great band to see live, even if you're not a fan of the fading screeched vocal style used on most of the songs.