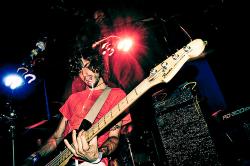 While it seemed weird to see a depraved, spastic night band like the Whore Moans just an hour before at the King Cobra on a late summer afternoon, it seemed like a perfect time for Philadelphia's the Loved Ones, with their big late period punk rock beats and classic power-pop hooks.

If only this show had been at one of the outside stages, I think this band would have been a high point for many younger fans at the 2008 Block Party, with their ability to switch from social rage to tender-sounding relationship observations with a sound drenched in OC-born post-emo.

I heard weird traces of old Southern California bands like TSOL or Channel 3 mixed with full-on Clash protest energy, matched with a very real need for some sort of spiritual resolution in their songs, which might have all come off heavy-handed if the pace and the energy weren't at such a high point. It's too bad that most of the Block Party audience who would have adored this couldn't get into the marvelous adult rock world of the club called King Cobra.

Of course, then precious moments such as the crowd feeding the band beer, as shown below, could never have happened.