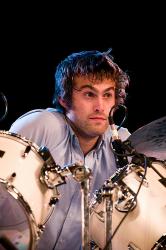 Vampire Weekend was introduced to the large crowd at the Capitol Hill Block Party by Washington’s governor (and my Facebook friend), Christine Gregoire. The band remarked later in their set that it was the first time they had ever been introduced by a governor. If you’ve never seen Gregoire speak, she’s terrible. Regardless of the crowd or what she’s saying, it’s a campaign speech with poor alliteration every time she opens her mouth. She’s an effective governor, just not a thrilling speaker. Still, give her points for showing up and she hit the right notes with the crowd (“Seattle has great bands from here and great bands come to Seattle”, “vote for Barack Obama”).

Vampire Weekend, on the other hand, is a professional band. Live, they sounded exactly like they do on their album. I should point out that I love their album. Their set lasted 55 minutes and it encompassed their entire self-titled debut record and a few others. Just before closing the night, frontman Ezra Koenig said the band played every song they knew tonight, save for some covers. I took that as code for “don’t ask for an encore” – still, I was not disappointed by VW at all. Quite contrary, they were the best band I saw at CHBP on Friday night.

Going through the set, midway through, Koenig said that it was a nice opportunity to play in Seattle because KEXP was the first radio station to play their music and said they felt grateful for that. Since then, the band’s career has been meteoric – and for good reason. They craft smart, catchy pop songs. With their reliance on African pop music influences, they don’t sound like much of what you hear on the radio.

Yet, for their reliance on Afro-pop beats and Koenig’s clever songwriting, my favorite aspect of the band are the basslines laid down by Chris Baio. On a song like “Campus”, the first thing you hear is the bass and it holds our attention through the entire track.

Early into the set, there were a few awkward pauses for tuning and such, but once they settled down, their set was enjoyable and fun. They were tight and didn’t differ from anything you’ve heard in recorded form. They were a worthy headliner and an excellent way to end the night. The final combination of “Oxford Comma” and “Walcott” was, as we like to say around here, unfuckwithable.