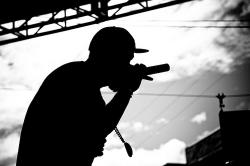 Tanned to almost red, lean and intense in all black clothing, RA Scion led Common Market with an angry energy I have never seen from him before. This is the band that was at one time the best bet for getting your mom and pops out to a hip-hop show; the love and unity spilled everywhere when Scion would rhyme and chant and extrapolate as Sabzi spun sweet and smooth rhythm and sound.

You may still be bringing the family along to a CM gig — though as the Block Party started, it was mostly young, rabid music fans clotting around the Main Stage outside Neumo's — but that's so everyone you know can get their butts kicked to DO SOMETHING about the nastiness this country has become.

It was a powerful, two-fisted set, and if the music from a DJ I didn't recognize wasn't so mesmerizing, I would have been startled enough by Scion's live performance change of tone to walk out of the festival and start organizing for change, dammit. I'm not being facetious — there are some hip-hop artists who compare themselves to the energy of the MC5, but they lack any political conviction to go with the fuzzy guitars and souped-up drums. Common Market is radical, revolutionary rap music, and Scion was swarming a healthy, bouncing crowd all by himself to get them started.

The set was long and strong, and a perfect way to begin my (and many others') experience of the Capitol Hill Block Party 2008. I am incredibly eager to get back to devouring CM's new double album-length brimstone banquet of language and groove, "Tobacco Road," with such mind-altering and dance-sparking anthems like "Slow Cure" and "Trouble Is." It's an eighteen track concept record about the death of the working class and the bastard priests who bless it, and listening to it again this morning it makes perfect sense that Common Market sounded like a Kentucky-born Clash taking "London Calling" out on the stage for the first time. Yeah, no BS, I had a hard time imagining being as impressed by anything else coming up at the Block Party after this.