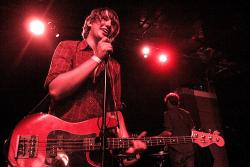 The New Faces are good. Maybe even very good.

They’re not rewriting rock or doing anything innovative (but who is these days anyway?). They borrow liberally from The Strokes, Franz Ferdinand, and Interpol and are not subtle about it. To be fair, though, those bands also cribbed extensively from the Velvet Underground, Gang of Four, and Joy Division while finding their own sound. But hey — the New Faces shouldn’t be penalized for listening to CDs, and they certainly shouldn’t be penalized for listening to the right ones.

That’s where the criticism ends, though. The New Faces packed a crowd into The King Cobra on Saturday afternoon and they delighted them. Although they’re all under 21 (they were the winners of EMP’s Sound Off! contest this year and only one band member has graduated from high school), they rocked an audience that was exclusively older than they are. That is no insignificant feat.

New Faces signed to Loveless Records shortly after winning Sound Off! and it is easy to see why. They have a poise and on-stage presence many bands twice their age will never see. I have heard a few songs from their debut album Two Years, and they are tight and focused. Their songs are catchy and upbeat and they rock both live and on Memorex.

Their influences are obvious but they do them justice.