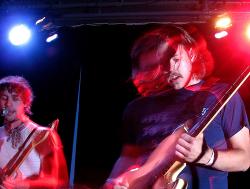 There is something defiantly wrong about the gassy, pushy skronk of Pleasureboaters, something shared between the band. This isn't the technically intense metal-punk of certain Seattle bands, and it isn't the Flipper sludge of others. It is a vocabulary created by the members of the band for each other.

This passion may explain why there was so much joy in the King Cobra for their performance, and its gender and status inclusivity was so liberal. There were lots of gals there, not just punk rock ones, and the usual drooling noise fanboys of course, but while the festivities of the Block Party may have been spilling into the club, the energy of Erik, Tim, and Ricky exponentially raised the fun and delivered it back outside. (In other words, people kept coming in and not leaving; a somewhat rare thing even on an ordinary night at a Seattle venue.)

It was interesting seeing music that at one time was raw power made for the faithful, in dank basements of the 90s, whispered about between book bag carrying zine writers, evolved into a perfect club soundtrack. The sonic scrawl of the damned has finally become party tunes, and it has lost nothing in translation save for the elitism. Seattle has an archetypal self-mythology about kids from the sticks (Kent and Renton, in Pleasureboaters' case) coming into town and dominating since before the days of grunge, and it's always a pleasure to see that energy played out Samsara-style over and over again.