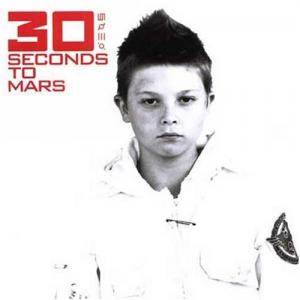 "Capricorn" by 30 Seconds to Mars

OK, well, er, um … Why, what a beautiful hat you're wearing? Is it new? Alright, alright, I'll stop trying to change the subject. Jeez, you'd think I just accidently microwaved the dog.

Why does Erik have 30 Seconds to Mars on his iPod? Well, it's a simple story that starts back in the glory days of, well, 1994? I think. I have "Capricorn" on my iPod pretty much — no, not pretty much — entirely because of My So-Called Life. Yeah, yeah, cheap excuse, but even though the band is prog-alt-metal trash, it does feature Jordan Catalono, er, Jared Leto and if you were like me, you spent one year waiting for your weekly dose of teenage angst from Claire (*sigh*) Danes (Angela) and company. So, when I found out that Jared had a band, I had to take a listen. Sadly, Angela would probably be greatly disappointed with the result and these days, jeesh, maybe we should all be really upset that Angela picked Jordan over Brian Krakow. I wonder what he's up to these days?