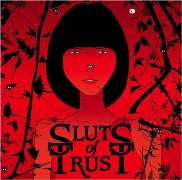 We Are All Sluts of Trust

Debauchery, distortion, and dirty sex: what else would you expect from a band called Sluts of Trust? The Scottish agro-twosome erupt with fury on their intriguing debut release, We Are All Sluts of Trust.

The angular, post-punk music is not your typical Brit-pop. It's much closer to Wales' angry darlings mclusky, or to our homegrown D.C. scene (think anything heavy off Jade Tree), with a tinge of old-school U.K. stompers Judas Priest.

The Sluts are an imploding fireball of cacophonous, heavy rock. Guitar solos and thrashing drums abound (the intro to "Piece of You" begins with a near-duplication of Van Halen's awesome "Eruption") and the album starts out slamming.

The disc changes personality abruptly with "Tighter than the Night," departing into the art-rock side of the Sluts as singer/guitarist John McFarlane lectures and cackles like a banshee over a sparse guitar riff and a wandering bass line. From this point forward, We Are All Sluts of Trust is comprised of both brutal punk and fashionista rock, and the Glaswegian growlers bridge the gap seamlessly.

One moment McFarlane sounds like he could kick your arse into next Friday with his snarl; the next moment, it's difficult to take seriously as he vocally struts like a thesbian spitting out sexually-vile Shakespeare. His vocal antics sway from falsetto-aspiring chirps to an overemphasized Scottish brogue when he recites mightily atop the music, rolling his r's all the way. Sluts of Trust's McFarlane (guitars/vox) and Anthony O'Donnell (drums) may intentionally bring a bit of drama into their performance: they met at the Scottish Youth Theatre, where both studied.

For all of their oddities, there are a few tracks on We Are All Sluts of Trust that are truly radio-rock catchy. "Meanwhile in Rocksville" is undeniably bouncy — so much so that the band may have more people dancing than circle-pitting. And the closing number, "Pirate Weekend" approaches Interpol or Franz Ferdinand's moody doom more than balls-out rawk. In fact, post-FF's takeover of the world, there may be a large audience hungering to gobble up what's served by these more aggressive misfit brothers of the kilt.

This album may not make it to the mainstream alterna-rock crowd, but no doubt fans of quirky punk and chunky metal will files this under 'must have.'