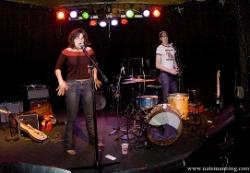 Cars Can Be Blue, with BOAT and the Withholders

The best thing about reviewing the Cars Can Blue Blue show is our ability to improve our google naughty words search hits. We haven't had a chance to curse like mother-fuckers like this since igLiz interviewed mclusky back in 2002.

If you are profanity-sensitive, you might want to stop reading now……

I think the pictures speak for themselves.

I mean, they're no Hutch Harris… but CCBB are off the hook!!

I knew I would love Cars Can be Blue the moment I realized their band name was derived from my favorite comedy show of all time: The State.

Their live show was a cup of Saturday night live, another of Tenacious D (but with a chick), a dash of indie rock chip-n-dales, a heaping tablespoon of Tullycraft and a pinch of Teenage Mutant Ninja Turtles. Add a little sugar to taste, throw in a condom (safety first), put the D in the P (and sometimes the A), bake on hot for about 45 minutes, and out comes Cars Can Be Blue.

And their songs are addictive as hell, which makes it even more embarrassing when you realize you're running around the office singing, "She needs the D-E-E-P-D-I-C… K-I-N-G for me" under your breath unwittingly. I think that’s a major HR violation. Cars Can Be blue are a major HR violation. I love them.

Well it looks like Char has kicked off the potty-mouth-lyrics-to-bring-in-the-google-perv-traffic.

Sure! I love the it in the track, "I'm Dating Batman" when she says, "He'd come home smelling like bad guys… What's up, Batman? Are you fucking the Riddler?"

Ooh, nice use of a superhero and an eff-bomb in the same sentence! Look out Google, here we come!

I'm trying to decide which song was the naughtiest and therefore my favorite. It would either have to be "Abortion" or "Dirty Song."

"You can sodomize me!
Get behind and ride me!
You can eat me out!
With that dirty mouth!
I will suck you off!
Fill me with you cock!"

You'd think with lyrics like that that Cars Can Be Blue would be some hardcore punk band, but they're not. They're actually an adorable pop band. How I wish I had had Cars Can Be Blue All The Stuff We Do when I was single.

My other favorite part about the Cars Can Be Blue show were the other bands we put on the bill: a nice bunch of middle school teachers (the every-fabulous Boat), and a nice newlywed couple (the strangely dazzling Withholders).

And instead of being influenced by gutteral blues, the Withholders are influenced by soft rock like Bread and Kenny (Rogers and Loggins). They even went so far as to cover Tegan and Sara's "Walking with the Ghost," with Aubrey taunting, "I know another band has been covering this song, but we were covering it first."

Yeah, the Withholder were like the White Stripes, only a little rougher around the edges. As if TWS could get any rougher.

And surely we don't have to tell you again how awesome Boat are…?