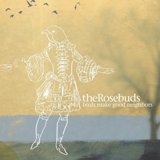 When the Texas State Trooper flips his lights and pulls me off the interstate, my stereo wails "I'm a desperate man, and that terrifies me," a subconscious cry I'd like to think, wrung from the soul just such a bible-belt authoritarian as this, a twitchy ghost haunting the lonely plains of west Texas.

Birds Make Good Neighbors, it turns out, is the perfect road trip record for a place like Texas. The sky is bigger, and the whole of songs on the Rosebuds' sophomore effort stretch the span of it beautifully. Jangling, reverberating guitars and ephemeral background vocals staked to earth by driving drum beats serve as a worthy soundtrack for endless miles of cotton fields, collapsing towns, and all things dried up, burned back and spit out. Pop songs with a dry heat and dark center.

The album went in around Seymour, survived the sharp gravel U-turn at San Angelo and lasted all the way back to Wichita Falls—seven and a half hours on repeat, a feat that speaks for itself. The husband and wife team Ivan Howard and Kelly Crisp know how to use keys sparingly and still effectively in writing brooding pop songs, a grateful reprieve from the onslaught of "keyboard bands" in the indie rock cradle. The pair also seem willing to tap into the sticky mysteries that lie beneath the surface of relationships—the good, the bad, the pull, the ache, the paradoxes and pleasantries. And its always a little creepy voyeuristic to hear private romantic confessionals coming from bandmates who also happen to be married to each other. It's like "I know who you are talking about, man. She's right there."

The only mismatch to me is that the lyrics are a lot darker and heavy-handed than the music might suggest, like the child pact in the song "Boxcar," "We could make a broom of weeds and sweep all of the daddies away." No need to get Tori Amos on us. You already have a good thing going.

Any of these songs would fit nicely on the Breakfast Club soundtrack or on a mix CD with the likes of OMD, Ocean Blue, and The Smiths. They are able to pull off the dark delivery because they get melody and structure absolutely spot-on right, the songs are nicely varied in guitar and drum styles without straying from the essential "feel," and because they maintain the vibe from the first track to the last.

Officer Groves, it turns out, may be a desperate man, but he let's me off, almost giving himself away as guilty of enforcing the vagaries of Texas highway law out of boredom. On my written warning it literally said, "Speed limit—70. Speed the suspect was traveling—‘a little over 70.'"