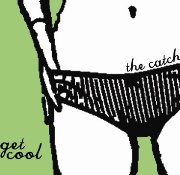 Get Cool is the very brand new release from Seattle sweethearts the Catch. It straddles a potentially dangerous line: too punky to be noo-wave, too noo-wavey to be punk. Let's split the difference and call it power pop.

It does call to mind in feel the great pop bands of the mid- to late- 70's that just missed (and missed out on the spoils of) the nascent new wave movement, bands like Robin Lane and the Chartbusters, the Records, Bram Tchaikovsky, and the Motors. (Know 'em? If you don't, stop and get thee to a used record store. If you do, continue reading…).

There's something of a bubblegum quality to the songs as well, especially in the vocal inflections on the uptempo tracks, which sound like they come from a teenager run wild rather than the twentysomethings they proclaim themselves to be in album closer "After Party."

But Get Cool isn't all sweetness and light. Many of the songs are about boys (which fits nicely, corrected for gender and orientation, into my holy troika of rock topics: girls, God, and drugs) and problems associated therewith. There's little of the carefree teen in album opener "Nothin' But Time," which sounds equal parts sexy and angry (kinda like my wife, bah-dum-bum) with its theme rooted in longing. It's a little punky and a little formulaic — it sounds a little like a Blink 182 or Green Day song, in the best of ways — and occasionally lapses into Courtney Love-isms on the vocals, but from there the album takes off into a much more interesting direction.

Amy Rockwell's monophonic-style noo-wavey keyboards bubble into the mix more prominently and help keep things feeling light. Carly Nicklaus' vocals have an engaging and enthusiastic quality, with just a hint of a sneer (often reminding me of Nina Gordon/Louise Post from Veruca Salt — and that's definitely a good thing, damnit!). It give the listener the impression that much fun was had making this record, always a cool (and hard to capture) quality. When the tempos come down, that same bubbly voice convincingly shifts gear to a more intense and provocative feel. The rhythm section of Jenny Jimenez (bass) and Alissa Newton (drums) remains tight throughout, always critical to the success of any album with pop aspirations, which Get Cool clearly has.

While the Catch are working overtime to remind me of late seventies power pop (not too mention a little Runaways style sassy rockin'), I think they might have had more of an ear for the early nineties pogo poppers like Elastica in the UK and the aforementioned Veruca Salt from here at home (okay, well from Chicago). Like those bands, there's some snotty attitude mixed in with the young, popular, and sexy party vibes. And like those bands, the Catch have a great ear for a tune.

"Wait" goes from the tension building verse bits into the short, sharp and punchy bounce-around-the-room chorus. "Between Friends" has nifty little white-girl funky breakdowns between verses that sound strangely at home in their punky surroundings. "All About Me" cribs some of it's melody from Buddy Holly, than takes some words from… Doris Day? "I'm gonna wash that man right out of my hair…" Oh, wait… "I'm gonna take my hips to a man who cares…" sorry, that's PJ Harvey. Carly puts her sexy on for "Nice," almost moaned rather than sung, with an almost predatory Guyville-era Liz Phair flavor. De-licious, and my favorite. The album ends with "After Party," which sounds just like, well, an after party: a little messy and a lot of fun. (The CD also includes the "After Party" video, where you can play Spot-Your-Favorite-Seattle-Indie-Rocker. Good times, good times…)

In the end, the Catch does a great job ignoring that line between punk and noo-wave, creating a sound that would appeal to mainstream pop-punk fans, guitar-pop fans, old school power poppers… just about anyone who likes any kind of pop music. Highly recommended for a good time!