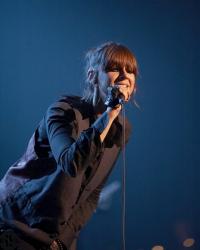 the sleepwalker February 12, 2008 no Comments

For anyone who has just emerged from years of indie isolation, Cat Power is the name used by recording artist Chan (pronounced Shawn) Marshall. She is notorious for odd behavior, crippling stagefright, and a complete disregard for standard professional performance practices. Many people attend Cat Power shows hoping for something strange, awkward, or at least memorable to occur. Sorry to disappoint, but to some degree, Chan has cleaned up.

For this outing, she brought along an excellent backing band of indie rock heroes known as The Dirty Delta Blues Band. The troupe features Judah Bauer (Blues Explosion), Gregg Foreman (The Delta 72), Erik Paparazzi (The Paparazzi), and Jim White (Dirty Three). On all previous tours, Marshall, backed by a less experienced group, had played piano or guitar on virtually every song and remained firmly planted in a seat. Tonight, her four backing musicians covered all of the instrumentation. During the band introduction portion of the evening, she even informed us, "My name is Chan and I have a microphone."

While the lack of occupying objects in the hands and under the behind of Marshall may seem insignificant, indeed quite the opposite is the case. The freedom allowed Marshall to prance back and forth across the stage like it was a playground. While she rarely faced the audience, she had little reserve when it came to dancing like a chicken (quite intentionally so), swinging her arms around wildly, or absurdly thanking the audience with gestures straight out of a Monty Python sketch. So, why would a performer who rarely engages her audience directly, spends half the show pulling up her pants, and does silly dances be of any interest to anyone? This is the great paradox that is Cat Power.

A Cat Power show is fundamentally about Chan Marshall giggling to herself nervously about the voyeuristic observation of the audience. The stage is less of a performance space and more of a window into the Marshall living room. Nothing about the way in which she dresses or performs should work, but somehow, it mostly does. At times, the sameness of the songs, the lack of hooks, and the loose, poorly enunciated vocalizations may make the audience weary (at one point, Chan even aped a yawning audience member). To her advantage, however, Chan Marshall comes off as completely unpretentious, totally sincere, and so friendly that you just want to run up and give her a hug. It doesn't matter that her stage behaviors are completely unconventional and perhaps unprofessional. We don't mind if she talks to the guitar player privately for a while between songs. It doesn't matter if she dances like a chicken. She is not, and has never been, a rock star. Chan is our BFF. Chan is the quirky girl we have a crush on, even if no one wants to sit next to her on the school bus.

As such behaviors cannot translate to recordings, Cat

Power is not all about sitting in a circle and crying together about lifetimes of insecurities. To be certain, Chan's vocal tone is the piece de resistance of the band, both recorded and live, and tonight's show was no exception. Chan's near/far microphone proximity dances, which are at times intentional and at others merely a product of her flightiness, did make the lyrics mostly indistinguishable. Otherwise, the sound, lights, and performances were well executed technically.

When I closed my eyes and just listened, I could imagine a sultry and smokey '20s Chicago night club. When I peeked, I saw the goofy dance moves of the vulnerable girl fronting a tough girl act in an '80s movie. (Think Mary Stuart Masterson in Some Kind of Wonderful, down to the fingerless gloves and the vest.) While the two sensations do clash immensely, it was possible to come to terms with the discrepancy during the lengthy set.

As someone who prefers a lot of the older material, I was extremely disappointed in the setlist, which virtually only included material from the two most recent studio albums. Most of the songs were covers sourced from the latest release, Jukebox, which I find to be one of the weakest albums in the Cat Power catalog. I had held some hope that hearing the album live would renew my interest, but alas, this did not occur. Still, there were a number of powerful moments including a silhouetted Marshall performing "Ramblin' (Wo)man" in front of red backlighting and a really spirited delivery of "She's Got You."

When it comes down to it, most people enjoy Cat Power because Chan Marshall has a beautiful and powerful, but subtle voice with which she reinterprets an increasingly unpredictable selection of classic songs. The performances and arrangements may lack dynamics and urgency, but sometimes, it feels really nice to just sit back, relax, and absorb the awkward, but sincere, outpourings of someone we can relate to.