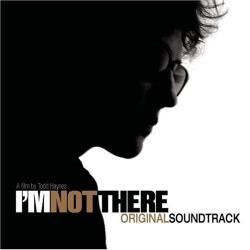 I'm Not There Soundtrack

It's been quite a couple of weeks for I'm Not There. First, Cate Blanchett earned a nomination for best supporting actress for her rendition of a young Dylan. And then later that day we learned of the untimely death of one the film’s amazingly talented stars, Heath Ledger.

I’d love to write about the whole record, which is almost exclusively a cover album — but the thing is, it's absolutely massive at more than 2.5 hours long. That’s a lotta Dylan covers, even for a serious fan. Only at the end, on the concluding track of disc two, do we ever hear the film's muse in a rendition of the album and film’s namesake, “I’m Not There.”

The album covers the gamut of veteran rockers: Sonic Youth, John Doe, Los Lobos, Willie Nelson, and many more populate the 30+ tracks. There are some voices just suited for Dylan: Stephen Malkmus (perfect on bluesy ballads like “Ballad of a Thin Man”), Mark Lanegan (has there ever been a more haunted voice in rock? On “Man in the Long Black Coat”), Chan Marshal (so embodying a female Dylan, it’s almost eerie on “Stuck Inside of Mobile with the Memphis Blues Again”).

Others, however, sound off somehow. Karen O can hang with a bluesy riff, but she sounds too impassioned for Dylan’s monotonous delivery. And while Sufjan Stevens’ take on “Ring Them Bells” is beautiful, it’s almost too pretty for Dylan’s grittier, unpolished style. For lead track “All Along the Watchtower,” I was conflicted: The Hendrix version has always been one of my favorite covers, so it’s tough to hear yet another rendition — even when it has one of my favorite artists (Eddie Vedder) on vox.

All in all, the soundtrack feels a bit excessive, but I’ve got to see this movie to see how the film and soundtrack weave together. I suspect that’ll be in the next few weeks, to see what all the Oscar hype is about, and to catch one of the late Ledger's last performances on this earth.