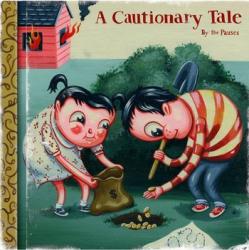 First off, I have to confess that I picked up this CD simply because of its AMAZING cover, which is styled like an uber creepy Little Golden Book with illustrations by artist Travis Lampe (I’ve already picked out 10 things I need from his site). The disc itself even looks like a little 45! *squee*

Secondly – omg, you guys. I don’t think I’ve fallen in love with an album at first listen like this since Rilo Kiley’s The Execution of All Things. The Pauses have put together a simply stunning debut. From the synthy keyboard notes of “Beyond Bianca” to the sway-worthy heartbreak beats of “Pull the Pin”, I adore every single goddamn thing about A Cautionary Tale. Lead singer and keyboardist Tierney Tough’s throaty vocals are complemented by pretty melodic oohs and ahhs from multi-instrumented Jason Kupfer (guitar, keys, computerboard (!), and foot bells), and ably backed by Nathan Chase’s drums and electronics.

The second track, “Go North”, is like a song from my favorite 80s movie – its bouncy drums and bell-like plinks hover around soulmate lyrics heavy with emotion, but light enough to keep you smiling. “There’s something | about you | It’s unnerving | so, stay there.” Next up, “Goodbye, Winthrope” is a deep instrumental bass and guitar tune that builds to a crescendo of pretty notes, then fades out just after 6 minutes – only to come back with a surprisingly sweet ukulele duet. “I know you belong to somebody new | but tonight, you belong to me.”

“Hands Up” starts with a classical vibe, and fades almost seamlessly into “The Leap Year”, which is a roller coaster of vocal highs and lows that show the full range of Tierney’s talent – and overall, it’s just really fucking pretty. It might even be the prettiest, most gut-wrenching song on the whole album: “We’re not in love | We’re just comparing.” “Little Kids” picks up the poppy pace with a mix of styles, blending piano with pounding drums, and ending in trailing “oooooohs” that prep you for “The Migration”, which is simply impossible not to jump up and down to. “And I can’t | be what you want me to be | And I can’t | see what you want me to see.”

Broken lyrics that leave you raw run throughout the album, but what really draws you in is the POWER contained within – the raw, driving emotion that anthropomorphizes each tune. And lest you think this is a typical indie-rock album about love and loss, The Pauses throw in abrupt changes to the beat that shake you to the core for deep, soul-pleasing sound. I can’t recommend it highly enough, and when they come to Seattle, you better believe I’ll be in the front row! Go forth, buy, and please your ears.