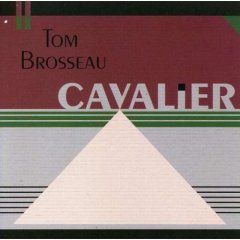 Tom Brosseau isn't going to win any awards for silky smooth vocals or full band bravado. Brosseau's latest effort, Cavilier, features his sparse instrumentation paired with his signature weathered 1950's folk singer voice. The fragility and intermittent cracking and breaking put the release in a sub-genre with Woody Guthrie and Will Oldham.

Mixed and produced by PJ Harvey collborator John Parish, the album focuses on Brosseau's delicate voice and soft acoustic guitar.  Parish sometime joins in with piano, organ and bass guitar in spots, but the embellishments are kept to a subtle minimum. "My Heart Belongs to the Sea" is an example of the formula at its best. Parish only adds a bare piano part at the end of the song, which adds the perfect amount of beauty to bring to song to a close. "My Peggy Dear" sounds as though it could have been written by Woody Guthrie or some forgotten folk singer with such lines as "I took a train from San Francisco to Omaha/I watched the land escape/Pass me by/I never felt so free my whole life/I never felt more like wanting to die." The somber honesty adds an aspect to the music that makes the songs sound like timeless classics.

Cavalier is a thoroughly intimate recording. It is lonely, stark, and stripped of the slightest amount of pretense. This is the kind of music that sounds like it was actually written on a train ride across the country or perhaps while camping alone somewhere in the middle of the country. There is little warmth in the album yet it is not cold either. Rather, it plays like a resonant voice that echoes in an empty cathdral. The emphasis lies entirely in the abandon of the singer's intriguing simplicity.