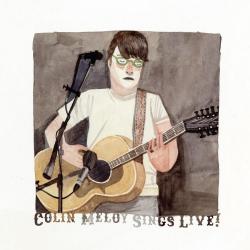 Sometimes it is hard to tell what to make of live albums. A majority of the time they are either (a) fans-only affairs or (b) contract-fulfilling obligatory events. In both of those cases, they tend to be less than inspired, a sort of off-hand release that doesn't really add too much to the mystique of the band or really challenge the fanbase. Of course, there are exception: the Police Live, Depeche Mode's 101, Built to Spill's Live (if only for the 20+ minute cover of "Cortez the Killer") to name a few. So, what is there to say about your average live album? Not sure, but I have to say something about Colin Meloy's new live solo album, the aptly titled Colin Meloy Sings Live. Indeed, he does!

I can tell you this, that Mr. Meloy sure is charming. I suppose that says something about a person's live performance. I mean, some bands are so good live it doesn't matter if the singer just mumbles the name of the song (think of any live Cure performance with Robert mumbling "Same Deep Water as You"). Other times, the singers are just enthusiastic cheerleaders without adding much in the way of banter, like David Gahan on 101, whooping it up for each song.

Honestly, most of the time, I like to go see shows for the banter. Billy Bragg puts on a remarkable live show, and a lot of it is his endless banter. He chats with the crowd almost more than he sings, but he's witty, charming and intelligent (and makes jokes about Major League Soccer).

Colin falls closer to the tree of Billy Bragg than anyone. Colin really knows how to sound modest, self-conscious and charming. It also doesn't hurt that he then goes onto play some really great songs from the Decemberists (shocking), Shirley Collins, the Smiths, Morrissey and some of his one creations. I could go on to list what happens for each performance, but I think everyone takes what they want for a live performance. They're good. If you like the Decemberists, you'll be pleased (minus the lack of songs that require the full band like "Mariner's Revenge Song") and if you're just trying to get your foot in the Decemberists door, well, I'd say buy Picaresque, but then you could spring for Colin Meloy Sings Live.

So there, Colin Meloy has recorded a disc of live performances. They're fun, charming and make great "I need to get some work done" background fodder. Nothing really jumps out at you, nothing really disappoints, but if you like you some Decemberists, Colin Meloy Sings Live will keep you happy as they work on whatever comes next. And really, that is what a release like this is all about: keeping our attention.