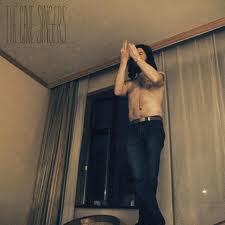 Night Canopy, The Cave Singers, and Lightning Dust at the Croc

A few weeks back, much-beloved local-rockers-with-a-national-following Pretty Girls Make Graves announced that they were splitting up. Drummer Nick DeWitt was the first to leave, and the other members also decided it was time to disband. A recent Thursday at the Croc was a great opportunity to see what the Pretty Girls Who Made Graves will be up to in a post-PGMG world, with both DeWitt's latest band Night Canopy and bassist Derek Fudesco's newest band, the Cave Singers, sharing the bill.

First on the bill was Lightning Dust, a two-piece band made of zero members of PGMG. Both members do, however, moonlight in British Columbia's psych rock band Black Mountain. Josh Wells and Amber Webber make up Lightning Dust; he played keys or organ, she played acoustic guitar, they both sang.

If the first rule of rock and/or roll is to know your audience, it was definitely learned by Lightning Dust and evident when Wells said early in the set that the Cave Singers and Night Canopy were the best bands in Seattle to play with — and then added the caveat that also included Whalebones, another popular Seattle band. That gesture was well-received by the appreciative crowd, surely made up of members of all three bands and their many friends.

During LD's set, the floor of the Croc filled out nicely, hardly vacant but also nowhere near being uncomfortably packed. The crowd were captivated by Wells and Webber's stripped-down, melancholic, and haunting music. "Jump In" was the second song of the set and showcased the band at its best. Their voices both comforted and conflicted with each other's, his more upbeat and hers more dark and eerie.

Up next were the Cave Singers, the band most of the crowd was there to see. Making their own type of folk-y Appalachian rock, they were nothing short of phenomenal (and don't just believe my word for it. The Weekly and the Stranger both raved about the performance on their respective blogs.)

Led by Pete Quirk (former singer of the missed rock band Hint Hint) and the aforementioned Fudesco, the Cave Singers are a band you can enjoy even with your grandparents, as they are nostalgic but never kitsch-y. Employing both acoustic and electric guitars as well as drums and washboards, the Cave Singers entertained a full-ish crowd for its entire 40-minute set. There was very little shuffling between the bar and the band room, which surely gave the fine bartenders at the Croc a much-deserved rest. For one song towards the end, the Cave Singers were joined by Lightning Dust's Webber, whose haunting vocals gelled very well with Fudesco, who also possess a dark and deep voice.

After the Cave Singers played, I was convinced that I definitely wanted to hear more from them and approached Quirk at the merch table wanting to buy a copy of its demo CD. Because neither of us had change for a ten, he gave me a copy of it for the remaining $3 I had. With its limited-edition numbering (mine is 70 out of 200), I think that might be one of the best bargains I'll find in 2007.

The headlining band, Night Canopy, experienced a few jitters to start their set, but a little unintended reverb never really hurt anyone and the band quickly settled down to an intimate, emotional set. Fortunately, they maintained much of the Cave Singer's significant crowd. I really think Night Canopy is a much better live band than they are on record (and I praised the album extensively); adding the lovely, soft backing harmonies of Jenny Jimenez only adds to the fullness of the band's sound and stage presence. I don't want to spend too much more time on their set, as there is little I could add that I didn't write about when reviewing its album, Of Honey and Country, but suffice to say, it was hardly a letdown.

Overall, it's very encouraging to see Northwest bands experimenting with other sounds and uncommon instruments than the typical three-chord, drums, guitar bass sound. At the risk of sounding hyperbolic, this has the potential to become the sort of show that people who weren't there claim they were in years to come.