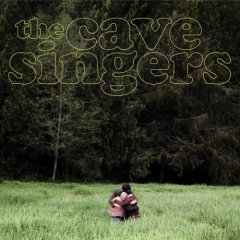 It must be the combination of shuffle stomp percussion and picking and strumming that had Matador Records labeling the Cave Singers as a folk band. But this is a misnomer; the zeitgeist that propels roots revival is a far cry from the traditional folk movement typified by Joan Baez and Woody Guthrie. The Cave Singers sing personal tunes, not protest songs on this, their debut record. These are songs that speak to the history of brash American individualism. It's what I love about this new, dark spin on roots music.

Lead Cave Singer, Peter Quirk, kind of sounds like a drunk hobbit or a chipmunk version of Bob Dylan, in a surprisingly hypnotic way. The deliberate rawness lyrics and vocals have the essence of the Verve's Richard Ashcroft at his best moments. When Quirk belts out, "Oh Lord I know what I done/Oh Lord I ain't afraid/Hold me, baby" to the stomping of the bass drum and scratch of the washboard, it reeks of nights spent swilling whiskey and feeling immortal.

The drumming is exceptional, carrying the weight of songs like "Seeds of Change" with its wire whisking and bright tambourine. Guitar is post-punk/roots, simple and down home.

While the Cave Singers aren't quite Gothic-Americana, they're in the company of other Northwest bands like Hillstomp and Glassell Park 3, forging an entire new genre which mixes indie rock urban sentiments with roots music. With the debut of Invitation, Cave Singers show tremendous promise that will continue to fire with their grueling tour schedule over the Fall. It's an album I know will grow on the listener, especially as the weather gets dark and dreary and wishing for spring.