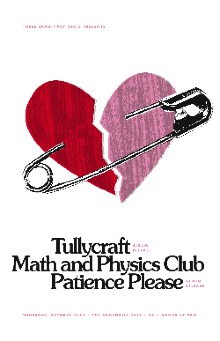 Is it weird that I'm still a little bit giddy from last night? The Lucksmiths show was SUCH FUN — thanks to everyone that came out on a Monday night to kick it indie-poppy.

Ready for more of the good stuff? We've got another show to put in pen on your calendar:

Thursday, October 18 at the Crocodile

It's been way too long (like two whole years?) since Tullycraft has released anything new and this time they're making up for it by releasing a 14-track album chock full of indie-pop goodness, catchy guitar-rifts, and swoon-worthy ooohs and ahhhs that will make us all light-headed.

Add to that the fact that it's Patience Please's album release show (the album hit the shelves last week but we talked them into celebrating it with us because is it THAT fun) and blissful Math and Physics Club and you've got yourself a night to put on your dancing shoes for.

And could the poster be any cuter for this show? Huge thanks to Corianton Hale at Sleep-Op for designing it and Rick at Seattle Show Posters for screenprinting it. YES, there's going to be limited edition screen prints of this for sale at the show. Email me (liz @ three imaginary girls dot com) if you'd like to pre-order one.