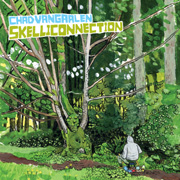 The Rules to Being a True Artist:

Chad VanGaalen is by all means a true artist, and one of the rare few musicians who completely deserves a self-named band. While slews of "solo" artists put their names atop their albums as entire bands play behind them relatively unacknowledged, Chad is actually responsible for virtually every facet of his music (even going so far as to handcraft some of the instruments himself). His individualistic approach reflects his modestly brilliant nature, and adds a profoundly intimate feel to every song he creates. It seems that he is always step or two ahead of his own inspiration, so that when it comes he's never too awestricken to take full advantage of it.

Chad's second gem, Skelliconnection, is a potpourri of disparate sounds, surrealistic poetry, and idiosyncratic imagery. Each song is a unique little dream, from the eerily soothing nightmare of "Red Hot Drops" to the fantastical lullaby of "Sing Me 2 Sleep," and Chad's vocals wander curiously and intently through the phantasmagorical dreamscape lain by his instrumentation. With guitars as crisp as dry leaves, vocals as shivery as a chill breeze, and odd noises as mock-scary as a halloween decoration, this is a record perfectly akin to the deathly optimism of autumn.

The technical dynamic of the music is good enough to leave you scratching your head and wondering, "Is this seriously one guy?" but it isn't so intricate as to make it seem convoluted or highfalutin. Once the layers of sound are disassembled, it becomes apparent that the only reason that it sounds complex at all is because it's made up of so many simple components. At times the music drops all pretenses of complexity and strips itself to a naked and vulnerable skeleton, and it's in these moments — when there's not so much noise between us and Chad — that the performer/listener connection is most notably evident.

Though this album provides a pleasant departure from the restless world to a more complacent one, it doesn't try to take you anywhere too specific once you're there. It's a museum of oddities, remarkably fascinating but bereft of any greater purpose than its own. Skelliconnection is far too introverted to be earthshattering, but it's a great album to close your eyes to, so that you can at least temporarily escape this place and visit the peculiar mind of Chad VanGaalen for awhile.