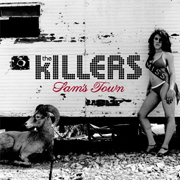 Sam's Town, the sophomore release by Las Vegas' The Killers, is definitely that: the dreaded second album. Where Hot Fuss was a linear throwback to 1980s new wave, Sam's Town exudes the effort of a band trying to grow, to delve deeper into their music history knowledge. The result is a suite of tracks — bordering on the ubiquitous concept album so well known to bands attempting to 'grow' — that centers on a vaudevillian, off-strip casino of the album's same name. Sam's travels back in time yet another decade, to the dirtier, seedier era of full-blown guitar rock. There's a dash of cabaret — no doubt influenced by the showy nature of their hometown — mixed with classic rock (think Springsteen and even Queen).

In some cases, such as the lead single "When You Were Young" and "For Reasons Unknown," The Killers nearly hit the mark. But in others, the attempts at bigger and bolder lose the raw exuberance and pop glitz that made Hot Fuss so catchy.

The bulk of the album is bookmarked by an "enterlude" and "exitlude," a Beatles/The Who tactic that felt a bit pretentious on first listen (though hearing them perform these tracks live, to an enraptured audience, made more sense out of the tracks).

"When You Were Young," blazes out of the speakers with epic guitar swells reminiscent of Big Country and Springsteen. It seems the perfect single to showcase the band's new direction, while still retaining the power-pop, anthemic moments like the crazy-popular "Mr. Brightside" from the debut. And in "Read My Mind, singer Brandon Flowers channels Bono with a thumping drum beat and perfectly gritty guitar solo to boot.

But there are strange moments too, such as horn-sprinkled "Bones" (with too-brazen lyrics like "Don't your want to feel my bones on your bones?") and the sheer fact that they named a track "Bling (Confessions of a King)."

Fans who spun the debut in constant rotation may be surprised at the direction of the second album. But whether that surprise is pleasant or not is in part up to the ears of the beholder. Are you willing to let the sprightly, polished synth boys of Hot Fuss grow into unkempt, road-weary, guitar-worshiping men of Sam's Town?

From the ear-deafening cheers of The Killers' live show at the Paramount earlier this month, it would appear so. The four-piece (with an extra keyboardist hiding in the shadows), took to the stage to schoolgirl shrieks and blasted through much of the new material, as well as many of the well-known tracks off Hot Fuss. The stage, alit with Christmas-light swags and low red and blue lights, captured lounge lizard cheese, replete with a glowing "Welcome" sign and velvet drapes.

For all intents, the band sounded as though they were tight — but the sound echoed and muddied as it carried up to the balcony. Flowers claims "I've got this energy beneath my feet" on Sam's Town's opening track of the same name, and he and his bandmates carried that energy throughout their hour-plus set, with only a few down-tempo moments, and even less words to share with the crowd, amidst the set. All in all, I left feeling more impressed than I expected (I'd heard not-so-great things about their live sets), but also a bit flat. The band has clearly vaulted to fame, and their set showed professionalism and well-rehearsed numbers. But like what's lacking on Sam's Town, I missed the raw enthusiasm of the first time 'round.