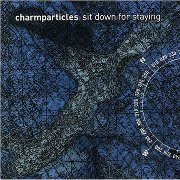 Sit Down For Staying

Nearly a decade ago, while living in Eugene, Oregon, a band came onto my radar that blew me away. They were nothing like all the gritty punk bands that also called that town home, nor the bouncy, flash-in-the-pan, horn-infusion acts like Cherry Poppin' Daddies. This band was dark, moody, their sound awash in reverberating beauty. That band, Drive, was a mainstay in the Eugene music scene but, after the band went through some personnel changes and a few of its members moved north to Portland, Drive called it quits.

So it was exhilarating when I first heard Charmparticles on John Richards' show on KEXP, as part of the "Your New Favorite Band" section of the Morning Show. The voices, the droning, shimmery guitars — all of this sounded strangely familiar. Never one to shy away from googling anything and everything, I plugged in the band's name and, sure enough, there were two recognizable names: Guitarist/singer Adam Wayne and bassist/singer Pamela Rooney, two of the founding members of Drive.

Charmparticles, based in Portland and which also includes Sarah FitzGerald (guitars) and Nathanael Merrill (drums), recently released their second effort, Sit Down For Staying, mixed by Erik Blood (The Turn-Ons, The Catch). It is a gorgeous six-song EP and an album that should be immediately scooped up by any fan of shoegazer (Charmparticles' sound is undeniably comparable to staples of that genre like My Bloody Valentine, Lush, and Ride).

In the five years since Drive's demise, Wayne and Rooney have improved their craft mightily. Layer upon layer of distorted guitars, open, plump drums, and ethereal harmonies comprise the lush songs. Wayne and Rooney's vocals are a natural match, as showcased on shared songs such as "Solvent" where chanteuse Rooney adds a floating echo to Wayne's words.

The swooping beauty of the title track is undeniable. Wayne's verklempt vocals align with the wave of distortion cascading through the speakers. And, three minutes into the song when Rooney chimes in, it's a goosebump moment.

"A/O", featuring Rooney on lead vocals, emulates the best of Ride. The watery guitar work toward the end of the song is perfectly swirly, perfectly spine-tingly.