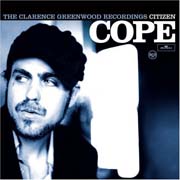 This summer, a couple hundred other lucky show-goers and I were treated to a rare, intense performance at The Hideaway. It was one of those uncharacteristically scorching August nights, exacerbated when coupled with the club's lack of ventilation and the fact that the management refused to fling open the back-alley doors for fear of leaking the sound out into the sweltering city. Packed into the hot and humid club like commuters on the Metro, we quite literally sweated through every article of clothing.

But despite the temperature, we were mesmerized as Citizen Cope, born Clarence Greenwood, strummed through an hour-plus of his unique material. It was just Cope and his acoustic guitar, occasionally assisted with some pre-recorded loops and beats, and it was enchanting. The crowd ate Cope up, and he seemed truly shocked, humbled, at the overwhelming response. After every song the Memphis-born musician modestly thanked us repeatedly, even staying post-show to shake hands with nearly the entire room-full of fans as we exited the club.

Standing there, swaying in a sea of sweaty limbs and fully enraptured in the music, I distinctly remember thinking that this would be a show that in 20 years I could tell my kids I attended, and they'd look at me jaw agape at the prospect of being able to see such a legendary artist in such an intimate setting. Cope is, in my estimates, our generation's Marley, our Dylan — an amazing storyteller whose genre-bending songs paint timeless pictures.

The Clarence Greenwood Recordings, Cope's second full-length album and his debut on RCA, is a work of art. For a musician who made his name in a New York hip-hop crew (Basehead), Cope's sound is now somewhere between reggae, folk and even rock. On the latest album, notable guest stars such as Carlos Santana ("Son's Gonna Rise") and Me'Shell Ndegeocello ("Sideways") grace the record, but for all their cred, it is Cope who speaks to us. His Southern-drawled gansta-lean vocals are the perfect fit to laid-back, slow jams like "Penitentiary" or "Hurricane Waters," or to the more urgent styling of "Son's Gonna Rise." "Bullet and a Target", the first single, is a traditional blues tune merged with modern-day rap sensibility, replete with a piano and guitar vamp and organic handclaps (the real deal, not synthesizers) that expresses "all the craziness we go through in this country," according to Cope.

Throughout The Clarence Greenwood Recordings, Cope sketches vibrant character portraits — some based on real people, others fictional — that explore universal human themes. Cope's lyrical cadence is somewhere between folk and rap; his prose depicting visceral tales of desolation, desire and drug addiction, among many others. Not only did Greenwood provide lead vocals and production on this gem, but he — a self-taught musician — also plays guitar, keys and drum machines on the tracks. For all of its components, The Clarence Greenwood Recordings is a stripped-down, raw, spiritual and soulful record pulsing with vitality.

The Clarence Greenwood Recordings captures Cope's essence on all 11 tracks. It is the album I will give many times over this holiday season, hoping to spread the word. Please: recognize.