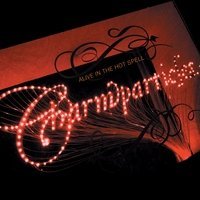 Charmparticles’ Alive in the Hot Spell hit my inbox on the day of Seattle’s largest temperature surge in years. It was a sweltering 89 degrees – inside my house. The last thing I wanted to do was stick another disc in the changer for fear of adding more fuel to the inferno (anything electric generates heat). But I couldn’t resist hearing the latest offering by this Portland-based band. After all, their ethereal, watery guitar-driven sound — just as pleasing as a flowing brook on a hot day — could be just what I needed to cool my soul.

Charmparticles, the blissful shoegazer band that was originally the brainchild of Adam Wayne and Pamela Rooney, have been on the scene for a handful of years now. The band, rounded out by Nathanael Merrill on drums and Sarah FitzGerald on guitar, is best known for their lush, shimmery landscapes of sound. They also employ a classic guy-girl vocal harmony. Or at least they did. Upon opening the press kit for this record, a startling fact hit me: Wayne has left the quartet, returning to California. I think I’d read this a few months ago, but I chose not to remember — or believe. The Rooney-Wayne harmonies — her willowy, haunting soprano juxtaposed against his steady, settling resonance — were what made this band. The sound was classic, and it fit so well with Charmparticles’ dreamy vibe. So without even having heard a note off Alive, I was mourning Wayne’s departure.

I needn’t have been so afraid, because while Wayne’s presence is missed by those who expect to hear him there, the three-piece version of Charmparticles continues to hold its own. I may have been skeptical going in, but halfway through track two, “Gold Plated Shot,” I was immersed. On that track, Rooney soars over the gorgeous sounds behind her while low-register harmonies fill in the gaps where Wayne’s voice used to be (I’m not sure who’s singing those lower-key notes; it could almost be the ghost of Wayne). Pretty, sweeping vocal melodies swirl in “A Danger to Your Health,” with echoes in all the right places.

Some rockers pepper the twelve-song release, too. Back-to-back tracks “Ablation Cascade,” “The Quiet View,” and “Get Your Complex On” pep up the middle half of Alive, taking Charmparticles into heavier territory. In fact, on “Complex,” Rooney and company sound downright angry. But then we’re back to what Charmparticles do best. The first notes of “Kohii” wash over the speakers in a sorrowful, gloomy, beautiful cascade, as Rooney’s soprano overlays the thundering drums and the heart-ripping riffs. By the conclusion, when a chorale of backing vocals and chimes join her, I’ve forgotten that I was ever thinking this record would let me down.

I know I’ve been harping on the lineup change. It’s just that I’ve known of and loved this band since their early inception, going back to the Drive days, and I’m taking Wayne’s exit like a breakup. But as the lyrics of “Relapse” say, “The girl you left behind is fine… I’m better by myself.” I half wonder if Rooney is singing straight to Wayne, though masking it behind lyrics that could be to a lover. In any case, they’re lyrics about change, loss, and moving on.

Rooney, FitzGerald, and Merrill have certainly found their footing as a trio. In fact, since Alive arrived in the mail, the band has signed to Portland-based Terrestrial Records, with plans to re-release their past albums on this startup label. Alive in the Hot Spell is both sorrowful and triumphant, and it’s left me with chills — finally quelling that uncomfortable midsummer heat.