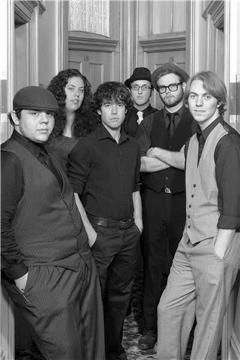 Reno Nevada’s Buster Blue take the chocolate-and-peanut-butter combo that is anachronism and indie pop (ala the Decemberists) and drive it in an interesting, exciting, and surprisingly rocking direction. With loud, urgent, shouting elements of Modest Mouse, swirling instrumentation like that of Sunset Rubdown and Menomena, and lyrics that sound like they were written ’round an Old West-era campfire, these mostly beardy wonders bring an element of theatre to their sound that is innovative and stirring.

An example of their exquisite, evocative lyricism comes from the song “Bluebirds and Honeybees:” The honeybees leave kisses buzzing round the soul / Take the world’s poisons down the rabbit hole. But perhaps one of their finest qualities is that every member of the group contributes something entirely unique to each song, and that facets of each personality shine through to create a cohesion — where it seems there should perhaps be none. As their bio says, “Buster Blue’s musical educations range from one member being drum major of the high school band to another being a screamer in a hardcore group. Their diverse backgrounds and upbringings help give color to their music, as well as make it difficult to pigeonhole them to a genre.”