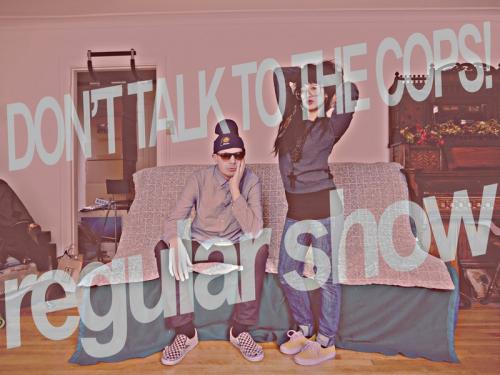 Sprouting from the THC-soaked cyber-seeds of Seattle entropysploitation rap band Mash Hall/They Live!, Don’t Talk To The Cops is the new electronic-resistance enhanced marriage of rhyming fire and beats taut like wires. I spoke with emzee and emissary Gatsby (Larry Mizell, Jr.) about his further work with his B-Boy collaborator, and what we’ll have no minds capable to wind inside the machine they unleash on Saturday, 6:45 p.m., in the love dungeon of the Cha Cha.

And: Mash Hall is playing again too, and Lar defines below the differences in the natures of both of these collaborations and prior joints. Mash Hall is playing Sunday, 11:30 p.m., on the Neumos Stage. Since that night’s later line up also includes Grynch, Mad Rad, Metal Chocolates, Darwin, and a Beat Connection DJ set, it’s the Closing Party NO ONE should miss.

TIG: Who is in Don’t Talk To The Cops and what is your group’s mission, sir?

Gatsby: DtttC is BlesOne and Emecks. I am the DJ/hypeman. The mission far as I can tell is to make shit you can dance to. Bles is a lifelong bboy and Emecks is a choreographer/hiphop dancer so they wanted to kinda cater to that. Not that’s it’s fuckin’ rave music or anything.

Is it a particular thrill to be playing the Block Party? What is it that’s more special about playing the CHBP than a usual show in the area?

Gatsby: Man, it’s always awesome playing Block Party. It’s our backyard, within blackout stumbling distance. Trust me, I’ve done just that from a few Block Parties. It’s the best party of the year, the focused totality of this goofy-ass neighborhood we call home.

How about that Cha Cha stage? Pretty hot down there? You like it hot?

Gatsby: Couldn’t ask for a better setting honestly. I like it hot. I want to see sweat flying out of the hair, people sliding all over each other, clothes sticking to bodies provocatively. We thrive in that environment in general.

Gatsby: Haven’t heard em yet but what I’ve heard about their sound sounds great.

Sorry, I was just being silly about their name. Virgin. Ha. Or “coming on” after Reporter?

You’re playing to promote your CD — is it officially out? How do we get one? Will you have some there?

Gatsby: Regular Show is out now, it can be obtained on iTunes or ordered at DontTalkToTheCopsMusic.com. We will certainly have one and I will personally hand one off to you, my man.

Thanks! I’d love to hear this amazing action. As you know, everything you’ve ever done is pure gold to me, Lar. Is the CHBP 2011 performance primarily be from that release?

Gatsby: Half and half from that one and the next one, I’d say. The next DtttC album is called Let’s Quit. It is awesome. Bles has been listening to the Stooges-and it’s just simple, raw and scratchy.

Wow. How would you describe the differences musically between DtttC and Mash Hall or Cancer Rising?

Gatsby: I should reiterate here that I am just really the DJ/hypeman of this particular splinter of the Love Family; I provide energy and play the tracks. DtttC is way about how Bles & Emecks move, how they relate even, the tunes are all about simple, melodic shit with an even more marked punk influence than Mash Hall typically brings.

Mash Hall (generally understood as Bles, Me, Janae Jones, and Emecks as hypegirl/dancer) itself takes a different form every time  but it’s generally just all of the musical influences we all have, filtered thru our experience as lifelong hiphop heads. People view hiphop as this static thing, four elements, Wild Style, put it in a museum. I might be talking out of my ass but I think we’re hiphop like the Minutemen were punk.

Gatsby: It’s not a codified thing or a dress code, it’s a way you take bits of everything around you and flip it and make it your own. So while it’s perhaps not reverential of the “culture” as most view it, it’s always heavily referential…man, if a person can catch all the references to our favorite shit that ends up in our music, they are on the ball. Pretty hipster-ass statement I realize, but it’s true. We rap and shit, but it’s a party. A really cool one, with lots of girls and every type of person there having a hoot, directed by John Hughes and the Hughes Brothers.

Now CR’s a different story, that’s my OG crew. I’m actually performing with Cancer Rising at the HG Lodge a little bit after the DtttC set, and I just got back from rehearsal. CR is very much about the two MC’s and the MC’ing, flow, delivery, writing and shit. More RAP, strictly speaking, but not as lame as that sounds.

Thanks so much for setting all that straight — you’re so creative and prolific m head was spinning there when DtttC came up on us. It’s good to have it all spelled out for we easily confused. Now, what have been some highlights of Cap Hill Block Parties you’ve attended in the past?

Gatsby: So many! Off the top of my head, seeing THEESatisfaction and Champagne Champagne last year, they were fucking brain-meltingly amazing and people were losing their shit in there. Seeing The Saturday Knights at their craziest and completely blacking out, waking up at home the next day like wha happen? But my number one is probably a moment from a few years back; I was hammered outside, walking nowhere in particular and the crowd kind of shot me into Neumos, right up front, as if through a wind tunnel. Then Jay Reatard started playing. Hooly shit. Still genuinely bummed I’ll never get to see that fuckin’ guy do that again.

I agree, that fucking sucks about Jay. What else besides playing lovely and lively music in your own set will you be checking out? Anyone the band can all agree to see together?

Gatsby: I need me some TV On The Radio, some Best Coast, some Fucked Up. I wish I could see Kurt Vile, or Unknown Mortal Orchestra but I’ll be at work.  I’ll be hopefully peeping Akimbo, He Whose Ox Is Gored, Witch Gardens, Hausu, Seapony, Slow Dance, The Posies, Grynch, Spurm. We’ll definitely be seeing our peoples THEESat and Champagne Champagne…one group me and Bles totally agree on, though, is TACOCAT

TACOCAT! I just love saying that band name. Damn. Where do you recommend drinking or eating in the area during the fest? (In other words, where can I find you to slur some words at you when you’re not performing or seeing some other bands?)

Gatsby: Ooh, good question. I’m a big fan of the shrimp sandwiches at the Fish Fry spot next to Neumos, of Rancho Bravo, or just a Pike Street hot dog.

Oh god that sounds good. I want a shrimp sandwich right now damn it! Any tour plans before or after CHBP 2011?

Gatsby: Yeah, we’re planning some stuff now. We have linked up with some real cool, energetic folks who are helping us figure things out. For now though, between DtttC and Mash Hall we’ll be at Doe Bay Fest, Bumbershoot, Reverb Fest, and more to come…

Great to hear! I want to see you as much as possible, it’s been too long. Getting near the end of this interview as book-length Death On The Installment Plan rant, if people were to throw things on stage to you at the CHBP 2011, what would you suggest they toss up on stage in appreciation?

I’m bringing ‘em! I have nothing but those things in my apartment and they’re all yours!  Can’t wait to see DtttC and MH!