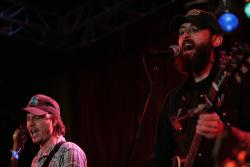 When I first spied the initial lineup for the Capitol Hill Block Party 2007 lineup, I knew I couldn't miss Grand Archives. Of course, this meant plowing through the Main Stage crowd, searching for the entrance to Neumo's for 20 minutes, and then enduring the overwhleming hot air stagnation of Neumo's for both the Cave Singers and Grand Archives set — but no matter. As soon as the band started with their pitch-perfect four-part mellifluous harmonies, all was forgiven and forgotten, and I was transfixed.

I spent the show smack front and center on the stage, surrounded by my good pals (including photographers Laura Musselman and Gregory Perez). As the band came onstage, Greg quipped how membership in Grand Archives appeared contingent on being very tall, having lots of tattoes and/or facial hair, and preferably wearing flannel. In short, we decided the band looks like a posse of modern-day mountain men, and claimed that it suited their sound; I explained to Greg that the band sounds like the best of early 1970's Peaceful Easy Feeling rock a la the Eagles, Crosby Stills Nash and Young, or even America or Seals and Crofts, and their somewhat straggly appearance total works with the overall appearance. He explained to me that it had been ages since any band had blown him away, and he was eager and hopeful he would find a new band to adore.

I told him he was in luck.

Within minutes of the show starting, he agreed.

For those of you who missed the crazy hype frenzy last spring, Grand Archives is the project of former Carissa's Wierd frontman and Band of Horses member (and igDana favorite musician) Mat Brooke. Here's their nutshell story: Brooke formed the band (then called Archives). They played a couple of shows in Seattle (literally I think, two shows) and posted a few demos to their MySpace page. Within mere milliseconds, Pitchfork proclaimed them the greatest thing since sliced bread, they got slated to open for Modest Mouse on tour, and Sub Pop signed them. Wham, bam, thank you, band! If the Northwest has known a faster rise to indie-rock fame, I can't think of an example.

I caught them back in April at the Crocodile and the band still seemed to be reeling from all their good fortune. As a hard-core Carissa's Wierd fan, I came in with very high expectations, and still was blown away by the show. Of course, their headlining set was super short (only eight songs, including a cover), and a couple of songs still had "bah bah bahs" for lyrics that hadn't yet been written.

Now, seeing them several months later, undoubtedly after several months worth of practice and gelling as a band… whoa. Their sound has grown so much more immense, with such power backing those still glorious harmonies.

While they've grown their sound, they've certainly retained their good natures and self-deprecating senses of humor. A few songs in, Brooke told the crowd (I paraphrase), "We're going to play some old songs from the EP and also some new ones… not that you'd likely recognize the old ones." Though I beg to differ; when they launched into "Sleepdriving," one of the "hits" — as much as MySpace demos can be hits, anyway — I know I was one of many singing along.

So despite the heat and less than ideal surroundings, all I can say on this one is: Gush! Gush! Gush! What a wonderful show.

Now, here are some more fabulous photos, from the always fabulous Laura Musselman: