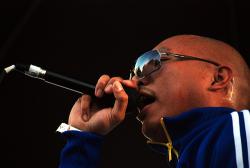 How I envied the group of elderly people atop the building across from the CHBP mainstage. They didn't have to deal with the haphazard placement of the stage, making it all too difficult to move anywhere once the Blue Scholars were performing. Because the main stage was positioned pretty much smack in the middle of the main entrance, the huge crowd gathered to hear the local hip-hop duo created a barricade for anyone else trying to pass into the other half of the festival. In my notes I wrote, "Dancing=futile."

But no wonder such a large audience had formed to hear the much hyped Blue Scholars; rapper Geologic has a smooth steady flow over DJ Sabzi's laid back beats. Although dancing was near impossible, everyone still made an attempt with arms swaying in the air. The crowd was varied too, with other elderly people, like those aforementioned on the roof, joined by the young and everyone in between.

Many were familiar with Geologic's rhymes, joining in to sing with him on his politically aware lyrics. Much love for the Northwest is also heavy in their music, with shout-outs to different local landmarks and neighborhoods included amongst references to news events. After one song, Geologic brought mention to the recent occurrences to the police brutality. It sounded as if Sabzi had sampled a Peter Bjorn and John song.

Unfortunately, Blue Scholars' infectious ebb and flow was being fought upstream by the interruptive conga line of people trying to push through the crowd. Unless you were insightful enough to arrive very early to catch the boys and stand in the front half of the floor, you were stuck fighting for a stance and auditory ability in the back. Much of their smart and affecting hip-hop was lost amid the din of talking and walking.