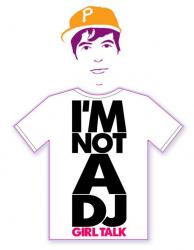 I do not blame Gregg Gillis, the man behind the craziness which is Girl Talk, for quitting his day job. If I had the choice between a laboratory science job or throwing parties for a living, uhm yeah, I'd pick the latter too.

His on-stage set-up is simple: just a laptop. What he does with it isn't so simple though; on the spot he's mixing up and matching hundreds of different samples of familiar top-40, hip-hop, and hell, even indie songs, into an entirely different layout to create what is considered a "new" dance song. Throw in half the audience on-stage with him, and you have what essentially makes up a Girl Talk show.

It didn't take long after his arrival behind the laptop for a stampede of festival goers to hop up on stage and start grinding to his invented mixes. I personally had saved up my energy during the Trucks to dance when Girl Talk came on, so off to the dance floor I went. Perhaps because I had heard he was a biomedical engineer, I thought he would be much more nerdy looking; of course he wasn't at all.

Avoiding the gigantic puddles of — water? sweat? — on the floor was difficult and sticky. Nonetheless, it was a gigantic dance party. Girls on stage were provocatively shaking for the audience, guys were showing off their pop-n-locking techniques. Then all of sudden-someone tripped the wire and the music stopped! "Oh!"s were yelled all around, but Gillis is quick and used to it, and the music kept on going in less than 30 seconds.

After more than a hour of non-stop dancing to spliced up and remixed samples of funk, classic 80s hip-hop, late 90s rap, a random Elton John vocal, and rock guitar riffs, I had to call it a night. That seemed to be the general consensus by that time, as everyone had left the stage to just Gillis and his friends, and almost half the venue was cleared out. Girl Talk himself, however, was still cavorting away.