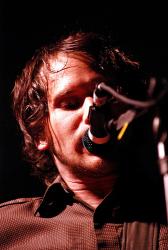 Okay, I heard that Ms. Monninger’s name is the most searched for on this fine website and I’m trying to shamelessly increase the hit count for this review. Consider her the Obama Girl of TIG, if you will.

The phenomenon of Silversun Pickups is fascinating. The band's rise has been meteoric, to say the least. Their influences are obvious: Smashing Pumpkins and Sonic Youth are the first that come to my mind, yet they’re lower maintenance than the former and more accessible than the latter. I think that’s where their genius lies. Silversun Pickups can be enjoyed by both serious music listener (mostly because of their prog rock sensibilities) and the casual listener. That’s where I would fit in. I own a copy of the latest album, Carnavas, and gave it a few spins and admired it quite a bit, but never found the ambition to even upload it to my iPod.

Yet, judging by the band’s slot headlining the first night of the Capitol Hill Block Party and giant mass of humanity that was packed (and uncomfortably so) to watch them, I was in the minority. I was at the last Seattle show the LA-based band played, which was in April at Neumo’s. It was a set that I thoroughly enjoyed and remembered thinking that that was probably the last time I’d ever see Silversun Pickups in a club. Each song can feel both epic and intimate. I’m not sure how they manage that, but like that spring evening, the sound tonight filled out the entire area and made it seem that the outdoor air wasn’t big enough to contain it.

The band took the stage at 9:45, promptly, after a kind introduction by badass liberal King County Councilmember Dow Constantine, who seems to really make an effort to listen to the bands he’s introducing. The first big applause of the set came about a minute in to the first song, when Monninger played a brief solo on her bass guitar. SSPU fans are crazy for her. She seems to have replaced Meg White (who replaced Sonic Youth’s bassist Kim Gordon) as the ideal indie rock girlfriend of the moment. Monninger is passive and soft-spoken, a fine bassist who lets her talent speak for itself.

Unsurprisingly, though, the biggest applause came at 10:30 when the band broke into its recent hit “Lazy Eye.” Nearly everyone in the crowd (or at least those around me) were singing along and knew every word. Also not surprising: a significant exodus for the gates began towards the end of that song. The band ended up playing until exactly 10:45, after being on stage for exactly an hour, and playing almost exclusively songs from Carnavas.

They were brought back for an encore after a polite applause and played three songs, all of which they said were from its debut EP Pikul. No sooner do I write in my notepad that nearly every song the band played is a rock song and not a ballad, they close with a ballad. I believe the one my friend and colleague Betsy Boston referred to as “the song from Pikul that Nikki sings lead on (can't think of the name, too tired to look)”.

Same with me. It’s that one.

Actually, Monninger has a soft voice that makes for a nice contrast with lead singer Brian Aubert. It was a smart move to end with that song. Shortly after 11, the crowd was sedate, tired, and satisfied.