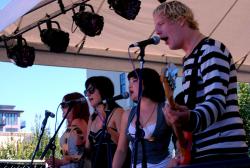 My favorite punk band is the Ramones, because they are just as much (maybe even more so) a pop band as they are a punk band. Sure, they've got songs about sniffing glue ("Now I Wanna Sniff Some Glue") and beating up people with baseball bats ("Beat on the Brat"), but there is also a softer side. You may need to slow down the driving guitar riffs, but there is a side to the band that appreciates pop, as well. Joey Ramone often referred to the Ronnettes as one of his favorite bands and said that he wanted "Blitzkrieg Bop" to be a catchy anthem like the Bay City Rollers' hit "Saturday Night." A lot of bands that label themselves punk adopt three chords and the nihilism of the Sex Pistols or the righteous politics of the Clash, yet it's very refreshing when a band adopts the pop sensibilities of the Ramones — and then adds even more sugar.

Which brings us to the Pop Machine, a relatively young punk pop band from Seattle.

I had just heard of the band when I saw the final schedule for the Capitol Hill Block Party and briefly checked them out on MySpace before offering to review this show. I'm glad I did because they have been the most pleasant surprise of the Block Party thus far. They began their set with a theme song of sorts, with three ladies as backup singers and a chorus that goes, "turn on the Pop Machine" (though the backup singers sang probably sang at least 50% of the harmonies, so I'm not sure if they can appropriately be called backup singers). They were more like Kate Pierson and Cindy Wilson of the B-52s, integral parts of the band. The band featured lots of surfy guitar chords and the ladies provided their share of "wahh ohh oh"s and "nah na na na na"s, with the final song adopting that part of the Beatles' "Hey Jude."

This set, which lasted a very quick 30 minutes, was the first (and maybe last) with a new drummer. One of the members of the band, I think the bassist (who looks a lot like Captain Sensible of the Damned), shouted "fuck you, Brandon!" out between songs. It turns out that Brandon was the drummer who had recently quit the band and left them with only time for one practice with a new drummer. He did a fine job keeping up and fit in to the band well, but one of the guitarists told me afterward that he was in another band that is getting ready to tour so they are in need of a new drummer before they can book any more shows.

I hope they find one soon.