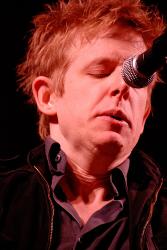 Over the past year or so, I’ve grown into a Spoon fan. I was, of course, quite thrilled that they were the headlining band the second night of the Capitol Hill Block Party, though I didn’t expect as big of a crowd for Spoon as Silversun Pickups had the night before.

I was wrong. From where I was watching, the show was packed with people that had, by 10pm on a Saturday night, a difficult time standing upright. I’m not sure what attracted much of the Pioneer Square crowd to Capitol Hill in the first place – it was probably more “block party” and the Seafair Torchlight Parade going on downtown and less Spoon – but hey, whatever. Around 10:30 or so, the Pike and 10th intersection cleared out and left a smaller, but still sizable audience for Spoon. From then on, it was a Spoon/ChrisB love fest.

For the first half of the set, my hearing was spotty at best. I couldn't pay much attention to John Vanderslice joining the band for a few songs. But still, the most pleasant surprise was that Spoon played a nice sampling of songs throughout the band's very deep catalogue. I was very pleased to spot many of my favorite songs from their 2001 and 2002 albums Girls Can Tell and Kill the Moonlight, respectively.

To me, Spoon is the quintessential American indie-rock band. They have flourished on Merge Records after a major label had no idea what to do with them. Spoon’s latest album Ga Ga Ga Ga Ga even debuted in the top 10 of Billboards’ Hot 200 album chart a couple of weeks ago. They have found a sound that fits well around Britt Daniel’s gifted songwriting. Spoon played for close to an hour and a half and were one of the tightest live bands I’ve heard, not just this weekend but ever. Each song sounded as well it could have on record. No accidental feedback or missed chords. This was a professional band that played a simply wondrous set.

Although my favorite Spoon song wasn’t played (“All the Pretty Girls Go to the City” from Kill the Moonlight), I had absolutely no qualms with the set list. The favorites I recognized are: from Girls Can Tell, (I think) “The Fitted Shirt” and “Me and the Bean”; from Kill the Moonlight: “The Way We Get By” and “Jonathon Fisk”; from Gimme Fiction (2005), I recognized “They Never Got You” and “The Beast and Dragon, Adored”; and from the latest Ga X5: “Don’t Make Me a Target." The final two songs were “Me and the Bean” and rockin’ “Jonathon Fisk,” which made for a perfect ending to a night that got off to such a tough and challenging start.

The last time Spoon played for a Seattle audience was the Sasquatch festival in May (I know it was at the Gorge in Eastern Washington, but I bet more people made the drive from Seattle than the much-closer Spokane) and before that, they played Bumbershoot last September. That’s three consecutive festivals now. I hope the next time Spoon plays in Seattle it’ll be a proper Spoon show with a Spoon audience.

Yet, for all of my bitching about the crowd, I should just listen to Daniel’s words from “The Beast and Dragon, Adored”:

When you don't feel it, it shows they tear out your soul
And when you believe they call it rock and roll.