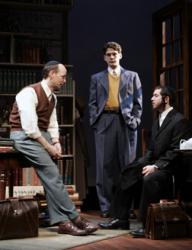 Even before the theater lights dim, a man walks to the edge of the stage and quietly looks into the audience, observing us carefully as our pre-play chatter diminishes, as cell phones are silenced, as we put away our programs and the last of our hard-candy wrappers. Soon he begins his narrative, a gentle memory story set in a bustling Jewish neighborhood in WWII-era Brooklyn, and there's hardly a peep from us riveted observers until the end of Act I.

Silence is key in The Chosen, a brilliant play adapted for the stage by Aaron Posner and Chaim Potok from Potok's 1967 novel, and now playing at the Rep.

The aforementioned narrator is Reuven Malter ( from Potok's 1967 novel, and now playing at the Aaron Serotsky); onstage throughout, he tells and observes (and occasionally even participates in) the story of his teenaged self (Connor J. Toms) and his widower librarian father (Larry Paulsen). Early in the play Reuven meets Danny (Gabriel Baron), the Hasidic boy who'll eventually become his BFF, and Danny's ultra-stern tzaddik father Reb (Eddie Levi Lee).

It's a rare thing to witness stage acting this good in Seattle. Every member of this cast is excellent, and there's never a doubt that Serotsky and Toms are different versions of one another. Then there's Baron, who makes the antagonism-turned-devotion relationship between Danny and young Reuven such a touching thing to behold. Lee and Paulsen are wonderful as the dads, too, and their performances make the play's prevalent father/son themes (the boys' home lives aren't as different as they may appear) all the more meaningful and profound. (2/24 update: director/co-adapter Aaron Posner will replace Aaron Serotsky in the role of Reuven Malter for the 3/15-3/20 performances.)

Silence can be worth more than words, and many of the play's complex themes (religious implications of friendship, 'secular' versus 'sacred') hinge upon the nonverbal. I won't give away much more, but just know that the enthralling story and truly wondrous cast make The Chosen my second-favorite Rep show this season (Anna in the Tropics still wins by a nose, but it's thisclose), and the first must-see theater production of 2005.

I've been a fan of local playwright Scot Augustson's shiny little nuggets of theatrical whimsy for the past few years now. My review of his latest comes near the end of its run, but you should totally check out The Chris Schussler Incident, a darkly comedic junior-high-memory play about a teen girl (fantastic, perfectly energetic Stacy Plum) and her BFF (Stephen Hando, last seen playing another kid in Red Ranger Came Calling) as they chronicle the troubled life of the titular geeky wallflower (wonderful Susanna Burney) who snaps one fateful day in 1978 during a seemingly normal Earth Sciences class.

I don't know about you, but I was quite often on the verge of some kind of meltdown 'round eighth grade, and this play captures the teen years' bizarre rites of small-town middle-American existence beautifully. If you barely made it through that time of life without freaking out yourself, it may be comforting to know going in that Chris Schussler is a mere 90-minute sampling — and what an enjoyable hour-and-a-half. Augustson and director Keri Healey have crafted a sweet, subtle little coming-of-age story that I can almost guarantee will ring true for any child of the 70s.

I won't blame fab Re-bar for this well-intentioned but ultimately pointless Vagina Monologues-style thing based on chapter eight ("Male Homosexuality") of the 1969 best-seller Everything You Always Wanted To Know About Sex*But Were Afraid To Ask. All that happens is that six actors (one of which is a token fag-hag female) sit perched in a row of stools on stage, read bits from the book, and make comments that are supposed to be wry and/or funny. At one point the boys stand in unison and drop trou (nothing beyond skivvies, and I'll admit that igLiz and I both perked up a little at that), and a couple other times they get up and dance to disco music for no apparent reason (which igLiz says she also liked).

The drunken audience laughed a lot more than I did. And I bet the SGN gave it a good review.

But overall it's just a mess. And seriously, don't even mistake it for a glorious mess, 'cuz it's not. More-energetic performances would have perhaps allowed the material to realize more of its full potential, but many of the actors in this local mounting just don't have the camp chops to pull off the pomo-irony the source demands. (It's sad when the only really funny moments are the actors breaking up over a line about a "stretchy anus".) My advice is to skip it in favor of one of the above plays, or to trot a few blocks west to see Million Dollar Baby, or to just stay home and watch your Wonderfalls DVDs instead.