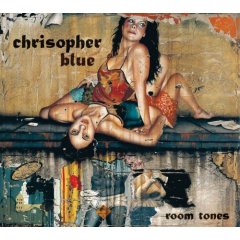 Former Seattleite and current Californian Chrisopher Blue is the perfect example of a talented artist who runs the risk of getting too caught up in sincerity – a crippling sincerity which makes his publicity one-sheet read like the script for made-for-TV movie. It oozes into his music, at times covering the simple and gritty beauty of it.

Roomtones truly is a beautiful album. When Blue can tone down the melodrama that injures tracks such as the pierced-heart croonfest “Mandrake” and slinking, neo-doo-wop number “Alone,” he shines. “What You Need” is a great example of Blue stripping down his sound and harnessing his emotions into a well-crafted and very moving song. The track is arguably the disc’s strongest, full of slow, driving, sing-along choruses and controlled suspense.

It was truly hard for me to make up my mind on Roomtones. Each time I listened to the album I had a different opinion of it. On first listen, I was floored by Blue’s full vocals and the tinges of blues and jazz. On second listen, I was turned off by some of the tracks’ dripping-with-sweaty-emotion lyrics and obvious themes. The thirty-three second rant “Outtake” is wholly unnecessary and off-putting, and would have probably been better off scrapped on the recording studio floor. The same could be said about “Scarecrow,” the album’s letdown closing track, which features Blue donning a faux country accent trying too hard to be a cowboy poet overtop of a slide-guitar melody.

However on subsequent listens, I was able to find the middle-path, embracing the albums high points while paying less attention to the musical craters. I came to the conclusion that some of it's good, other parts not so much, but on a whole, Roomtones is a solid and well-crafted record.