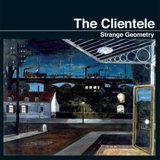 Back in the day when my musical tastes were being constructed, the son of one of my neighbors, let's call him Keith, worked in the local video/music store. He was about ten years older than I was, but I was a music nerd, so we chatted about music and he introduced me to some of the bands that form the foundation of my musical tastes. The most important of these bands I learned from him was Galaxie 500, and I scoured the local record store discount bins for copies of all of their albums. Nothing reminds me more of those days than driving around listening to my cassettes of On Fire or Today. So when I popped in The Clientele's Strange Geometry, it was a little like taking a time warp back to those days when I felt music was all new and I wasn't jaded by years of reading music critics (so watch out!). Refreshing and exhilarating, Strange Geometry is one of the most melodic albums from 2005, or pretty much any year for that matter.

Most songs by The Clientele are dominated by interplay of gentle guitar melodies, echoing vocals and drifting violin notes. You could make a solid argument that they are what the Jesus & Mary Chain would be like if they followed Nick Drake closer than Joy Division. Strange Geometry opens with the Beatles-esque "Since K Got Over Me," a pop gem that sounds new every time you hear it, with layer after layer of melody intertwined with bittersweet lyrics: "I don't think I'll be happy anyway," intones Alasdair MacLean. This theme is continued into "(I Can't Seem to) Make You Mine" that slows the pace down. The 60's pop influence of The Clientele is most bare on tracks like "E.M.P.T.Y.", right down to the horn/string blasts and "Geometry of Lawns" that sounds like a Chad & Jeremy outtake. "Losing Haringey" is a spoken word meets Galaxie 500 with a stream-of-consciousness commentary on lone man's day in Britain where he finds himself in a childhood photograph. The album closes with "Six of Spades," a song drifts off into a haze of organs and scratching record vocals like memories into the dark.

Some songs might have a little too much pop harmony in them, such as "Spirit," which sounds a little like a Neil Diamond song on depressants. The orchestral opening of "Impossible" has you expecting Burt Bacharach to appear, but luckily they save the song with jangling guitar before the strings try to overpower them again. However, these transgressions are minor compared to the overall ethereal glow that permeates from Strange Geometry.

The Clientele don't mimic the airy tone and sounds of Galaxie 500; instead they remind us of that sound and then build from that point. Compared to many of the more stripped down and rock-oriented bands in indie rock these days, The Clientele are a welcome change to pop harmonies and bittersweet (but not depressing) moods. Strange Geometry was overlooked on many best-of-2005 lists (including my own) but it deserves mention as one of the best pop albums of the year. (If Keith happens to be reading this, I'd say you might like this disc too. Trust me on this one).