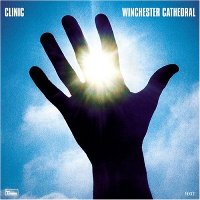 For those familiar with Clinic's previous material Walk With Thee and Internal Wrangler, their latest offering Winchester Cathedral will come as little surprise. With the sounding of chimes, Clinic launches their latest headfirst into material that resembles, frighteningly so, the arrangements found on their prior efforts — at least for the first half of the record.

Why so critical, you ask? After all, is Clinic not Liverpool's answer to today's vehemently mundane rock scene? The scene which has introduced relatively nothing new since the last Liverpool band to personally take on Jesus? Is this not the scrubs-bearing quartet that John Peel and Thom Yorke so proudly trumpet like two fathers gloating over their wee'ns at a rugby match?

Yes, one and the same. Yes, they are that damn good and important — precisely why I expected more, because I know that "more" is entirely within their reach. But I digress.

Clinic may yet be the remedy to the ills which befall the conventions of modern rock. Their elixir is still quite potent. The serpentine vocals of Ade Blackburn slither over exotic melodies and surgical-precise percussion, taking us on wildly psychedelic trips through East India, Arabia, Brazil and Sicily, whilst not leaving the comforts of English rock.

If the first four tracks on Winchester Cathedral offer little in the way of progression, then the six that follow are evidence of a band experiencing a split identity. Turning on its path mid-way through, Clinic spits out the barbaric instrumental number "Vertical Takeoff" in Egypt, shakes us with the deviant Brit-punk "W.D.Y.Y.B", twist our ears with the David Lynch doo-wop "Falstaff" and the Kletzmer/surf of "August". All of this finished off with the soothing jazz instrumental titled "Fingers".

Are you dizzy? Although much of this latter material is unquestionably darker, sexier and more intense than anything recorded prior, one gets the image of a two-headed beast dueling against itself. But perhaps their newfound strength is found in this duality. Perhaps the purpose of this dragon was to deceive us, luring us into a familiar trap, only to sink its venomous teeth into us at its own leisure. The harder we fight, the more the web ensnares us. The more we listen to the charmer, the more entranced we become.