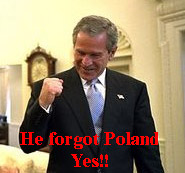 Of Dive Bars and Debates

The afternoon of the first debates, my friend Melissa and I decided that it would be fun to get a few friends together at a bar and watch the showdown between John Kerry and George W. Bush. After a bit of calling around, Sandy — one of our all time favorite bartenders — graciously agreed to let us watch the debates in the cozy surroundings of the Nite Lite. For those of you who've yet to visit this fine establishment, it's a classic. Already decorated for Halloween with garish pumpkin lights and ghost pictures, the Nite Lite provided an ideal setting for the spectacle of the first presidential debate.

I arrived a few minutes late with Matt, a college friend visiting from out of town. Melissa, Bryan, and Don had already settled into a conveniently located booth facing the televisions, which beamed down the smirking specter of our fine (and hopefully soon-to-be former) president. Matt and I ordered a couple PBRs and sat back to watch the show. A handful of people lined the bar, all attentively gazing up at the debates. From the start, Bush's simpering countenance raised the hackles of many a debate watcher, particularly when the network (CNN, I believe) cut to split screen during Kerry's responses.

Kerry wisely focused his responses on the war in Iraq. In recent weeks, his campaign managers finally realized that Kerry's main opportunity for winning in November hinges on the current debacle in Iraq. Prior to this new approach, the campaign resembled a race for the mayor of Dayton rather than the President of the United States. By shifting the emphasis to the sole issue of Iraq, Kerry tightened up his message and concentrated the differences between the two candidates into a stark dichotomy.

Time and again, Kerry pointed up Bush's failure to have "a plan to win the peace" before entering Iraq. "I know I can do a better job in Iraq," Kerry asserted in his opening remarks. He emphasized "rebuild[ing] the alliances [and] reaching out to the Muslim world, which the president has almost not done" as essential components of his plan for fighting the war on terror. Although I personally find the "war on terror" concept to be problematic — can a war be fought against a mercurial concept? — Kerry's decision to employ this term so often used by the Bush administration effectively trained attention on the differences between Bush's policies and Kerry's plans for Iraq and for American security. Kerry made "bring[ing] people to the table" the centerpiece of his proposals — a refreshing contrast to the cowboy vigilante stance of the current administration.

When Bush addressed the war on terror, he spoke of an America "on the offensive." Everyone in the Nite Lite grimaced at this remark, thinking instantly (as I did) of an endless string of preemptive wars a la Afghanistan and Iraq. Bush repeatedly characterized the current international situation as a conflict between those who appreciate freedom and those who espouse an "ideology of hate." This us-against-them approach, a classic part of the Bush administration's framing of the "war on terror," paints in black and white what can only be properly rendered with a myriad shades of grey.

A brief laugh came when Bush remarked that he "was hoping diplomacy would work" in the run-up to the invasion of Iraq. "Right," one person remarked, "hoping but not really trying." Of particular amusement were Bush's repeated references to "strong alliances" fostered by his administration to support the war on Iraq. "My opponent says we didn't have any allies in this war. What's he say to Alexander Kwasniewski of Poland?"

"Did he just say Poland?!? While he's at it, why not bring up the Marianas Islands?" interjected one Nite Lite patron.

Bush's defense of his decision to keep America out of the International Criminal Court proved equally laughable. He described the ICC as "a body based in The Hague where unaccountable judges and prosecutors can pull our troops or diplomats up for trial." Henry Kissinger must sleep well at night knowing that someone like Bush is on the job.

One of the most telling parts of the debate came in the candidates' brief exchange over the Bush daughters. Kerry noted that he had found occasion to "chuckle a few times" at comments made by Bush daughters Barbara and Jenna. Bush quickly interjected that he has been "trying to put a leash on them." Kerry's response: "I know. I've learned not to do that." This brief aside succinctly demonstrated Kerry's respect for his daughters (and, as Melissa and I noted, his respect for women in general).

Most surprising of all were the four women seated at a nearby table who appeared oblivious of the debate (in spite of the television looming right across from them). Rather than watch the face-off between Bush and Kerry, they preferred to drink white wine and share the latest gossip in tediously loud detail. {As an aside, who the hell drinks white wine at a dive bar?} Their strident ignorance of the impending presidential election prompted a number of pointed glares from those watching the debates, particularly when the ladies' crowing laughter drowned out Bush's absurd responses. My table took it as yet another example of the political apathy that continually plagues the United States. Although 2004 has been a record year for voter registration, voter turnout even in races of importance has been morbidly low for years. High registration numbers matter little if people don't come out on Election Day — the true test of the current drive toward electoral participation will be in November.

Kerry: "The terrorism czar, who has worked for every president since Ronald Reagan, said, "invading Iraq in response to 9/11 would be like Franklin Roosevelt invading Mexico in response to Pearl Harbor."

Bush: "First of all, of course I know Osama bin Laden attacked us. I know that."

Watch the next round of debates live from Washington University in St. Louis this Friday, October 8th, on virtually every network around.

Other websites that made us giggle like imaginary girls after the debates: