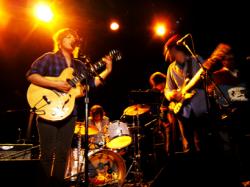 Picking up where we left off in CMJ 2007 part one…

After my Thursday afternoon with Yo Majesty and Elk City, I headed over to the White Rabbit to meet up with Fat Asian Baby again and watch Georgia band Dead Confederate, whose moody and dramatic indie rock soundscape was punctuated by dim lighting and smoke machines, producing a spooky aura around them.

After they played, FAB and I sat down with them outside Piano's to ask them your imaginary questions, with plenty of hilarity ensuing. See their answers at the bottom of the page, and go see them in December when they come to Seattle to play a KEXP Christmas show (details don't seem to be available yet, but they assured me that it's a done deal so I'll be sure to remind you!). After that, FAB and I tried to get in to see Florida's Black Kids, but everyone else in NYC beat us to it and there was no getting in. Seems they were one of the hottest tickets at this year's Marathon, riding the buzz from a recent glowing review from Pitchfork. So we rounded the corner to Arlene's to watch Boston's Hallelujah the Hills, a six-piece who've received lots of favorable press locally and deservedly so. They're set was tight and fluid, with trumpet flourishes atop pop/rock beats and upbeat guitars. Visit their MySpace and listen to their theme song, "Hallelujah the Hills."

On Friday, I started off at the Bowery Ballroom with another of my current favorite bands, Drug Rug. After hearing and falling in love with their album recently, it was my first time seeing them, and they completely blew me away. Fresh off a string of dates opening for the Fiery Furnaces, they were rock solid with their catchy, melody-driven pure old fashioned rock and roll. They have "it"; in fact they're oozing with "it." If you never listen to another word I say, get yourself a copy of their eponymous debut album, easily my favorite of '07.

I then cruised over to the Mercury Lounge to catch the end of Boston's Bon Savants. Sadly I only made it in time for one song, but it was their opus, "Between the Moon and the Ocean," and it made me weak in the knees as usual. Thom Moran wore his signature white suit as they played in the exact same venue in the exact same time slot as last year; this year it seemed the attendance was higher, and some of the audience members included WFNX DJ Dave Duncan and Bang Camaro leader Alex Necochea.

Bon Savants' polished grace and silk-smooth sound have earned them a reputation as one of Boston's best and most notable indie bands.

Old TIG friends The Shaky Hands were coincidentally on next, and I stuck around to hear the first half of their set. Those who attended the TIG birthday parties in July will remember their organic rock style and their energetic hand-drumming. It seemed to me they were a little tighter at this CMJ performance, which could have resulted from some time on the road or just a conscious effort to put their best foot forward given the occasion, but I quite enjoyed the songs I stayed for.

Before I split, someone tapped me on the shoulder and I turned around to find Renée from Elk City! She had ventured out to check out The Shaky Hands based on the CMJ Festival Guide's description of them, which read: "A Portland brand of West Coast folk and poppy melodies."

I didn't stick around for the end of their set because it was finally the time I'd been waiting for all week: My North Carolina boyfriends, The Sammies, were about to take the stage at Ace of Clubs. A little history: Last year I saw The Sammies for the first time ever at CMJ and completely fell for their adorable Southern charm and energetic rock and roll. This summer, shortly after I returned from the TIG birthday parties in Seattle, I threw my own birthday party at my favorite local venue, P.A.'s Lounge. Six bands played, and The Sammies were the headliners. They drove all the way from Charlotte, North Carolina to Boston just for my party, and I'm forever in love with them for it. So I was out-of-my-pants excited to see them again.

Their set was everything I wanted it to be: Fun, upbeat, and rocking, with lots of heart. Their brand of no-frills rock with a touch of pop is accentuated by their engaging and charming stage persona, led by singer/guitarist Frank Backgammon. Guitarist Bobby Freedom spends the entire set blissfully in his zone, eyes closed, inspired by the sweet sounds of his guitar. Drummer Donnie Yale bursts with energy and fun, while new bassist Conrad Vacation (who I met for the first time this night but am 100% in love with just like the others) completely pulled his weight and nicely complemented his new bandmates. I could go on writing my Sammies love letter all day, but there are still other matters to get on to.

On Saturday, I was tired and sick of the NYC subway, but I made it to the Fader Lounge to see Drug Rug one more time and enjoy some free booze. Ran in to an old friend there that I hadn't seen since I was about 14(!), so I spent much of the evening catching up with him. I ended the night with Boston's Eli "Paperboy" Reed and the True Loves at Crash Mansion. Reed & co. are a throwback to the 1950s, with Reed crooning atop the big sounds of a full rhythm and blues band with a three-piece horn section. They even brought out a trio of female backup singers in matching outfits for a few songs. The young Reed masterfully achieves a soulful sound from an era long before his time, and is well known in Boston for this. Watching him play, you find yourself for a moment imagining what it was like to live in that era. It was a fitting and satisfying end to my long week of rocking out.

Q: If you were going to do a song about New York based on your experience here, what would the song be?
B: It would have to do with drugs and playing.
H: It would probably be a Sonic Youth song.
B: Yeah. A lot of noise, a lot of chaos, and the lyrics would probably have to do with late nights. Throwing up and falling in a bag of trash.
H: Or just a noise song, not even anything with lyrics, just a fucking Sonic Youth noise jam.
B: Yeah.
H: That'd fit good.

Q: What's your favorite New York delicacy?
B: Hot dogs! Hell yeah.
H: The hot dogs were fucking killer that we had earlier. Deep fried hot dogs.
B: With pineapple and teriyaki… I got a teriyaki one.

Q: So not the pizza or the bagels?
H: They have killer hot dogs!
B: We've eaten a lot of hot dogs.

Q: What would be your ideal jeopardy category?
B: Music. [Laughs] I guess that's obvious.
John [who just joined us]: U.S. History.
H: Or hot dogs.
B: Hot dogs! Hot dogs for every answer. What do I wear? Hot dogs.

Q: This is a joke from Dana, but you can insert your own punchline: What do you call a drummer without a girlfriend?
J: Hot dog.
H: [Laughs] A hot dog.
B: That's pretty close!
B: I was gonna say happy. H: Thrilled.
J: Percussionist.
B: Ba dom bomp.

Q: Do you guys have any pre-show rituals or superstitions?
B: Beer, drinks.
H: Yeah, some people pot, some people drinks. That's about it.

Q: What does Dead Confederate really need right now?
J: Money?
H: Money! [Laughs] Money. That's true!
B: People that pay attention and come to the shows!
H: Or money.
B: Or money. One of the two.
H: I'd take the cash.

Q: Whitey tighties or boxers?
B: Boxers.
H: Boxer briefs.
B: Kayaking boxers that breathe and dry out quick.

Q: White chocolate mocha or macchiato?
B: White chocolate.
J: Sounds good.
H: Is that like… what is that?
Me: Coffee I think. These are people from Seattle, remember.
H: Oh. Fuckin… Folgers.
B: Oh I thought we were just talking about the actual thing, like, I love white chocolate. So what was the other thing?
Me: Macchiato.
B: Plain ass dark, no sugar, no sweetener, no nothing, straight up black ass coffee.
H: Regular dark roast. Motor oil.

Q: The View or Ellen DeGeneres?
B: Oh my god. H: I'll take The View. I don't watch the show, but Ellen's terrible. She's so horrible.
B: I would take Ellen. J
: Ellen.
B: That's two Ellen and one View.

Q: Do you guys make music for yourselves or others?
B: Ourselves.
H: Definitely.
B: Cause I can't write a song unless it's about something personal or I'm upset. And it has nothing to do with whether the band's going to like it or not.
H: Yeah. It's all personal shit.
J: We're just fortunate that others like it.

Q: If you could fight anyone dead or alive, who would it be?
H: I'd like to get my ass kicked by Johnny Cash, that'd be pretty fucking cool.
B: Damn, that's a good answer. I would fight Webster, cause I would win. I would like to just get smacked by James Brown one time.

Q: What are your thoughts on Radiohead's recent self-release?
B: Awesome. Perfect. Genius. More people should do that.

Q: Got any good jokes?
B: Hardy's got all the good jokes. How about one of the no arms and no legs jokes?
H: I got tons of those. Or a Little Mary Jane joke.
B: Yeah, tell one of those.
H: Little Mary Jane came running in the house one day, and she was like, "Mama mama, the barn's on fire, the barn's on fire!" and her mom was like, "Mary Jane, your daddy's gonna kill you, he's done told you about playing with matches in that barn." And Mary Jane just laughed and laughed, cause she knew her daddy was in that barn. [Everybody laughing]

Little Mary Jane, she was out on the playground one day, she was climbing on the monkey bars and she had a little sundress on, and the teacher came over and said, "Mary Jane, you need to get down from the monkey bars. Them boys are gonna come over here and look up your skirt and see your underwear." Mary Jane just laughed and laughed, cause she knew she didn't have any underwear on.

Q: Well thanks you guys!
H: Thank you! That was easy.
B: That was the most fun interview ever. Good questions!