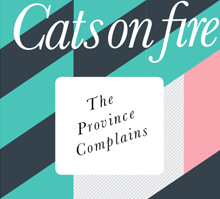 If you’re wondering which Scandinavian city might be the home of next modern rock explosion, I point you no further than the hallowed streets of Helsinki. Not only is the capitol of Finland like a European Seattle, right down to the abundant ferries and fish, but also it harbors a healthy rock scene that extends well beyond the novelty status of Lordi or the Leningrad Cowboys. If you wanted to pick a band that could be the vanguard of the Helsinki scene, it would have to be Cats on Fire (although, technically they’re from nearby Turku, Finland). Their debut album The Province Complains is a wonderful gem of pop rock, borrowing bits and pieces from the Smiths, Jens Lekman, and Belle & Sebastian to create the sunniest album you could imagine from a country that takes you north of the Arctic Circle.

If you’re a fan of the dream pop that has been so adeptly revived by Math & Physics Club or the aforementioned Jens Lekman, you’re going to love The Province Complains. The first proper album of the Finnish foursome is beautifully produced, with a full, rich sound (OK, now I’m making it sound like something from the Food Network. Sorry.) It's one of those albums where you know you're in for a treat from the moment you hear the guitars and organ from the opening track “I am the White Mantled King.” The song jangles and dances like the long-lost son of the Smiths or a more melodic version of the La’s.

Lead singer Mattias Björkas’ voice falls somewhere between Robert Smith and Morrissey, if you can imagine that, where he jumps back and forth from a deep, rich quality to a falsetto but with a few less affectations than usually follow Morrissey. This is especially evident with one of the highlights of the album, “The Sharp of End of the Season,” a remarkable piece of pop confection, with drifting harmonies and beautiful guitar (thanks to Ville Hopponen). “Astray” is more playful, like a more cheerful Tilly & the Wall that runs into Dexy’s Midnight Runners, while “Higher Grounds” could have easily fit on Louder the Bombs. You can get more of the feel of the 60’s pop revival on “Born Again Christian” and “Mesmer and Reason,” songs filled with Kinks’ rhythm and Beatles’ melody. “The Smell of the Artist” becomes a hybrid of the Smiths and the Animals without sounding like a copy of either, creating a song that is dynamic and captivating. The gentle “If You Must Tell Him” is much more stripped down with more like Belle & Sebastian as the song builds into a Nick Drake tale of lost love. This is balanced by a barn-burner like “Draw in the Reins,” which compared to the rest of The Province Complains is like a Formula One racer in a bike festival.

Cats on Fire sound remarkably polished for a band coming off their debut album. If anything, The Province Complains sounds like what I wished from the Voxtrot debut: an album filled wall-to-wall with irresistible melodies that are unabashed pop. Cats on Fire will also not be the last band to come out of Finland to make us shriek in pop delight; instead they are the flag-bearer for healthy rock scene of Helsinki. Sure, right now people think of “Rock and Roll Hallelujah” when they think of Finnish music, but when Cats of Fire finally make it stateside, I’m sure there will be a feeding frenzy for their attentions.