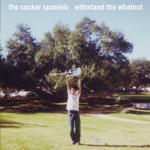 Imaginary girl Liz sent along five tracks available on the C. Spaniels website and asked if I would be willing to consider including the band in the September edition of astroPOP. I told her sure, that's what it's for. Twenty-four year old Sean Padilla (who pretty much IS the Cocker Spaniels) is on the "Dirty South Summer '05" tour, but isn't coming anywhere near Seattle, so that column would be the perfect place to plug the sunny, funny, mad-scientist bedroom art-pop she'd recently encountered whilst recently attending the Athens Popfest.

Thing is, I actually have Withstand the Whatnot, the full-length those songs are from in a stack of albums left over from editing BANDOPPLER Magazine, and just hadn't listened to it yet. Once I started to, though, I found myself falling in love, and forced to plug the 21-song album at greater length, hoping it will run as a long review on TIG.

You see, this is the first stuff I've heard since I encountered Sufjan Stevens in the late 90s to melt my heart this way. "When I was a little tyke, I played with books and wires — quiet, skinny as a rail, not an athlete or a fighter," Pedilla reveals his youth near the end of the album, flashing back to his upbringing in Brooklyn, NY, watching his father work the turntables at clubs. Becoming "MC Little Sweetie" came about by reading Bible stories and singing songs into a tape recorder for his grandmothers. By the mid-90s, inspired by bands like Guided By Voices and Sebadoh, he began releasing independent tapes with titles like Radio President, Geatland, and the double-cassette Fear of Girls (!!). "I believe in my music, and I believe that there are people out there who want to hear it," he writes on his website. Crafting layered but joyfully simple alternative chartbusters, doing a website ("Mundane Sounds"), pubbing a print zine ("Too Broke to Rock"), Spaniels is a classic nerd-punk-artist.

Withstand the Whatnot has been out for a while, as Padilla has moved to Texas and then to Austin (that line actually makes sense if you know anything about Austin and Texas), and has been working on a follow-up he says will be called Sometimes You've Got To Fight To Get A Bit Of Peace. But his compact disc debut should not be missed, despite the patronizing, misunderstanding reviews rags like "Left of the Dial" have given it. This album is chock full of lovingly crafted, majestically weird, achingly sincere, wonderfully funny, bizarre little gems.

"The Only Black Guy At The Indie Rock Show" starts the album (and is available on the C. Spaniels website), and evokes chuckles with lines such as "(I'm) the only sign of melanin in one big sea of ivory," "I look just like a thug against the dressed down Pavement fans," ending with, "I wonder if white folks who like Jay-Z feel as alienated as me?" As Chuck D said in SPIN in the 80s, miscegenation is a beautiful thing, and the viewpoint(s) Spaniel brings to this kind of nearly-one-man-band DIY chamber pop intensify the flavors.

Instead of sticking to the cryptic ennui-poetry that most songs of this type are written around, Spaniel isn't afraid to be topical in both big and small ways, and his descriptions of blacks in the Student Union at his college in "Little Africa," and the cheapness and cruelty shown to pizza delivery people and phone workers in "Fifteen Percent, Please" and "Telemarketing Song" are cunning.

Like Loudon Wainwright or Elvis Costello, Spaniels doesn't stick with merely sharp satire — his songs can be heartbreakingly confessional, too. His observation and imagery in the devastating "Your Things Are In The Yard" vividly recounts his parents' fighting and eventual divorce. Although the perfect power pop of "Final Season" is one of the most fun songs you'll hear all year, with lines like "running on coffee and pep pills, still yawning — my forehead is covered with words spelled backwards," it shares genuine anxiety from the frantic narrator. The long distance relationship he sings of in "Weekend Girl" can only be experienced first-hand. Although he won't print the lyrics to "Temptation Song," he describes his obsessive lust with clarity. And the album closes on a blunt and vulnerable request for guidance, "Hold Me Accountable," reminiscent of the stark outsider-gospel of the Danielson Familie.

Like the two guys in They Might Be Giants, Padilla is a humble weirdo with something to say, and though sometimes it's just an observation to make you laugh, it also inevitably makes you think, in spite of its gentle humor. The fact that his work also brazenly bares his soul makes him a unique artist as well, and makes me desperate to hear "Sometimes You've Got To Fight To Get A Bit Of Peace."