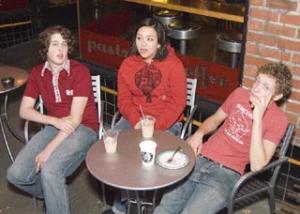 Coffee with a Rockstar: Mon Frere

We imaginary ones have been huge fans of Mon Frere since we saw them blaze through the competition to win EMPs 2004 Sound Off! competition in 2004. Since that time they’ve been a fixture in the all-ages community, and have signed on with Cake Records, where they’ve just re-released their stellar debut EP Real Vampires.

We feel very fortunate that we had the chance to meet for coffee and conversation with the trio {Kyle Swisher, Nouella Johnston, and David Haasl} before they leave to tour and take over the world.

TIG: Mon Frere! How’s it going? Do tell us what kind of coffee do you drink, and where you like to get it from…

Kyle: I don’t really like coffee at all. I’ll usually get some sort of soy chai tea late at the Nordstrom Ebar where my girlfriend works, or if I go to the Starbucks where my mom works I’ll get a Passion Tea Lemonade, or as I call it a Pedro The Lion.

Nouella: I drink iced soy lattes. There is a coffee stand that used to be called “Jesus Christ Cafe” in Mountlake Terrace that did double stamps after 3pm. I’m not really down with Jesus Christ personally, but dude, any coffee that he agrees to endorse has got to be out of this world. They have since changed their name to Jungle Java, but their lattes are still divine.

TIG: How did you guys all meet?

Nouella: David and I were in a band, Kyle and I were in another band, both bands fell apart. So we fused together to form a ninja vampire tribute band.

David: Kyle and I met in my freshman year of high school in algebra 1. He hated me, ’cause our teacher loved me. I met Nouela in middle school when she joined the challenge program and our jazz band.

Kyle: My friend Brian was in a Pop Ska band with David and Nouela. This band was also Nouela’s senior project. At the same time I was in a Metalcore Screamo band, and our 2 bands would play together ever so often, that I started hanging out with Nouela.

TIG: We heard from your Mom, Kyle, that you learned to play guitar as a senior class project. What grade did you get?

Kyle: Grades for the senior project didn’t come in an A.B.C. form. It was more about you learning a trade or building something and then making a 20 minute presentation on it in front of a panel of judges and peers. The judges would decide if you could graduate or not. I think I won them over with my acoustic rendition of “No One Else” by Weezer.

TIG: So you guys have recently signed to a label. How did you pick Cake Records?

David: I always thought they picked us…?

Nouella: They kinda hunted us down. They were the nicest, most enthusiastic label people we’ve ever met. They came to a lot of our shows, and it was obvious that they liked our music.

Kyle: Yeah, we were getting people from labels coming out to shows every once in a while, but none of them seemed to genuinely like us as much as Dave and Evan at cake. Plus, good distribution and unlimited studio time doesn’t hurt either. I don’t think we could be in any better hands.

TIG: The Real Vampires EP is a re-release, yes? What’s different about this EP from the last version?

Kyle: Cake gave us a couple days to remix the tracks at their own Specter Studios. We made it sound a little less roomy and more in your face! It also has the same artwork but it is packaged in a Digi-pack which is cool.

David: MUCH higher sound quality. It’s been remixed and remastered. Also, the artwork has been brightened up and it’s been switched from a jewel case to a digi-pac.

TIG: Whoa, ree-dunkulous? You’re totally going to have to spell that for us.

Nouella: I’m a pretty pathetic speller. But studies have shown that the ability to spell has nothing to do with one’s intelligence. I actually just made that up. But I think it’s troo.

TIG: When is your debut full-length due out?

Kyle: We need to finish a few more songs then we’ll start recording in the next couple months. I’d like to see it come out in February.

Nouella: I don’t think we have an official date yet, but we’re going to start recording sometime in September. So probably early next year.

TIG: Who else are you listening to locally? Nationally? What’s your guilty pleasure music?

Nouella: I’m always listening to Kane Hodder. They’re pretty fantastic. Nationally, I’m listening to the Futureheads. Personally, I don’t feel guilty about anything I listen to. But I do embarass the hell out of David and Kyle when I tell people I own (and love) Hanson’s Middle of Nowhere album. What! It’s fucking good poppy music. and you KNOW that when “Mmmbop” came on the radio, you rocked out with your car windows up.

David: Locallly I like the Myriad. Nationally, Every Time I Die. Guilty pleasure? Atreyu.

TIG: Who would you like to have cover one of your songs?

David: Hmm, that’s a toughy. Probably a band like NOFX. I love them.

TIG: If you attended Hogwarts School of Wizardry, which house would you each be in and why?

Kyle: I would be in Slytherin cause Snape has awesome hair.

David: I’d have to say Gryffindor — not because that’s where Harry goes, but because the Gryffindor crest would make the coolest tattoo

TIG: Do you have dayjobs? If so what are they?

Kyle: I work at the Alderwood Red Robin aka “The Dirty Bird.”

Nouella: I was recently fired from 107.7 The End. Apparently, telling people their favorite bands suck is not a quality they want in their street teamers.

TIG: What’s next for Mon Frere? Do you have tour plans? Who would be the dream band to tour with?

Kyle: We’re going on a two-week tour this summer and hopefully going out again in October.

David: …then a really long two month tour in January/February. I’d like to tour with the Gossip. They’re so fun!

Kyle: I’d like to open for the Smashing Pumpkins when they reunite.

TIG: Do you have a tour bus/van/pickup?

Kyle: We have a Chevy van with pink plush interior and a TV with a lime green screen.

Kyle: As far as we know, it’s us driving down to Seattle and playing. Though we have played at the pavilion, a place that holds AA meetings, and the Mountlake Terrace High’s Winter Ball.

Nouella: If there is a music scene in Mountlake Terrace, I’m certainly unaware of it. But the local highschool has jazz nights once every few months.

Nouella: If we could play to a packed house in some teeny down in Middle America, my life would be complete.

Kyle: When someone is covering our song.

David: I want to rock some arena shows, get on a big label, and tour the world.

TIG: Mon Frere is a three-piece. We imaginary girls maintain that three is the magic number. Yeah it is. Who, in your opinion(s), is the best three-piece band of all time?

Nouella: Honestly, honestly, all my favorite bands have like, 25 members in them..

Kyle: I’m going to go with David on the Jimi thing.

David: At Neumo’s, Nouela, me, and our roadie Jordan snuck some Stoli backstage and got kinda sloshed… that was fun times. Then, from three rooms down we could smell Minus the Bear toking up. Nice.

Nouella: Usually it’s David, Jordan (roadie number one) and me wishing we were getting shitfaced with Kyle in the bar.

Nouella: Kyle is a LUSH.

Kyle: Yep! The drink tickets are all mine!!!