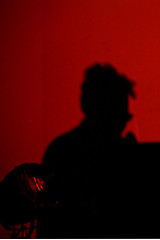 Colin Meloy and Sean Nelson light up the night at UW

I love Winter Solstice. There's something to be said for the camaraderie in getting through the darkest time of year together, as a people, I mean. We hustle and bustle, and wrap little treasured trinkets up in scraps of fine paper for our friends; we string lights in the windows and the world is filled wtih the soothing smell of cut greens. There's copious amounts of baking and good cheer. Life should always be this good.

And just as we hang said lights and sparkle up our sidewalks for varying Solstice celebrations, so sat Colin Meloy and Sean Nelson, to add some shine into our season Thursday night at the UW Hub. As he opened up the show, Sean's comfortable banter was immediate and tangible — a nice change from some of his more big-venue shows of late. His gorgeous pitch combined with those signature chord changes to echo and abound in the warm, dark hall during tunes like "Sometimes You Have To Work On Christmas" and the Monkees' "Porpoise Song." His sets consistently hold that moment that I love, when there's nothing in the room save for willing spectators and sparsely accompanied singer, pulled back from the microphone just-so in mid-serenade. All that matters in those little instants are those singular notes; there are no facts, figures, histories, or precipitations. It's totally pure.

With the stage and room and air still warm and ringing from Sean's stellar set, Colin Meloy ambled out on stage fresh off of Sunday's show at the Moore and proceeded to weave us through a sea of melancholy for a good hour, everything from old Tarkio numbers to tracks from the newest album (due out in March). I've had the pleasure of seeing Colin's solo set a few times now, most notably at the Iron Horse in Northampton, MA and with Laura Veirs at Town Hall in New York City, both a few years back. Much like Sean, Colin's sets don't ever disappoint.

It was a lush cocoon of corduroy and Polaroids, all ventricles and plasticene. The talented (albeit a bit eager) AV club running a light show put forth a great effort that would have yielded a ton of gorgeous shots, but unfortunately there was no photo clearance for Colin's portion of the set. I do have filmstrips upon filmstrips boxed up in my mind, however, perfectly exposed and meticulously framed: all blue-white direct with an incandescent golden backlight for a halo, shifting to an afternoon frontal sunset gleam that bounced from the guitar body to the attentive, beaming faces of the crowd. Sigh.

It was totally fucking gorgeous.

Here's a shot from that Town Hall show back East, to give you an idea:

Just squint, and picture an argyle sweater and a major label.

And as if the night wasn't perfect enough, they had this little gem in the lobby, all inconspicuous, unmentioned and unassuming:

Right. Consistently the best ten dollars I spend on merch at every solo show of his I've been to. I've yet to have a proper sit-down with Colin Meloy Sings Sam Cooke, but I have managed to give this five-track slice of deliciousness a quick once-through — guh. It's by far my favorite, although there's a fist-fight at the moment in my stereo between this and Colin Meloy Sings Morrissey. Until they're done duking it out, here's one last shot from the night:

That about does it. Review forthcoming, and more shots (of Sean, at least) up in the TIG flickr pool to tide you over until then.