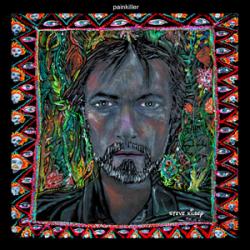 From the opening notes of "Outbound" to the closing ambient ripples of "Not What You Say," this is an album in the truest sense of the word, meaning that it must be listened to in its entirety.

Steve Kilbey is best known as the lead singer of the veteran psychedelic rock group, The Church. Their releases, especially during the 1990s, are dense and sonically dark offerings that continue to be amongst my favorite records to this day. What many people don't know is that Steve Kilbey has put out several solo CDs that have been just as good if not better than the widely known releases by The Church. In this capacity, he focuses more on experimentation and space, providing a much more challenging range of material. Painkiller follows in this vein, but also includes some more accessible acoustic melodies that lie comfortably next to the expected experimentally charged compositions.

Back to "Outbound," perhaps the best song that Kilbey has recorded in years. Driving bass leads the murky track while some strange ambient electronics flicker in the background. His voice is raw and energized, but also holds with it a certain amount of desperate vulnerability. It is rare that Kilbey shouts, but here he frantically belts out the first lines "White hippy Moses like an aphid in the roses/Universal inverse in inverted poses/Like a snort of amnesia, a ball up your noses/Not what the man in the street supposes." That is just the beginning of a song that not only improves with each additional listen, but one that doesn't lose any of its initial charm upon repeated playing.

"Celestial" is just that, a gorgeous floating piece of music with ringing mellotron and lovely piano bits splashed all over it. Here, Kilbey's voice returns to it stoned cool croon as the beautiful melody is supplemented by further radiotronic dabbling. "Song For The Masking" starts out with a cadent bass line and marching drums that almost echoes "Piggy" by Nine Inch Nails, but without the animosity and with an ounce of what sounds like defeat in his voice. The acoustic guitars that come in transform the chorus into more of a torch song where the lyrics turn towards self-doubt: "Masking the rusty surface/Facing the sea/Asking me for a purpose/So patiently."

The more experimental songs on the record are corkers too. "File Under Travel" is an epic instrumental that lasts over ten minutes. The pounding of the bass is reminiscent of the opening track, but a little more loose and raucous. Crunchy overdriven guitars are blended with rhythm instruments to make a wholly dizzying chaos that is quite wonderful. And for anyone seeking something more accessible, there are some great straightforward acoustic songs that will appeal to those yearning for something a little more mainstream. "Forever Lasts For Nothing" is a short folk song that sounds like it could have been squeezed onto an early Church record. "Spirit In Flame" combines the experimental and electronic side with the folksy side to make a quite remarkable track. Kilbey's vocals are soaked in hazy studio effects while a typically slinky bass line and trippy drums provide the backbone of the music until the chorus arrives with a more conventional sounding, but altogether moving acoustic guitar-led change.

Painkiller was released by Karmic Hit Records, an independent Australian label that is more or less run by Kilbey and his brothers. This new record is not cheap as it is not yet easy to come by in Seattle, but is well worth every last cent that you will have to spend in order to acquire it from the record company or from Amazon.com. The release is truly astonishing though. I would even hasten to say that it may be the best record of the year as far as I am concerned.